Shen Yun ‘Something to remember for a long time,’ Says Pianist 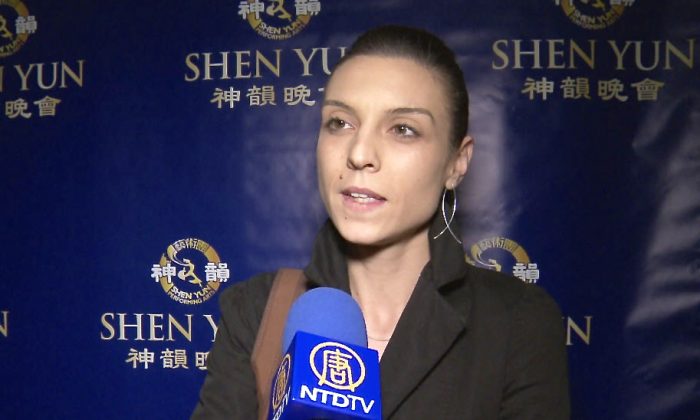 Gorjana Zekic enjoys an evening at Shen Yun Performing Arts at the Segerstrom Center for the Arts, on March 12. (Courtesy of NTD Television)

Ms. Zekic, who studied at the Eastman School of Music in New York, praised Shen Yun’s pianist as “absolutely fabulous,” and the soprano and conductor both as “top-notch” in their fields.

“Really, and everything combined together was an experience I’m going to remember for a long time,” Ms. Zekic said. “I’m really glad I was here tonight.”

Based in New York, Shen Yun is hailed around the world as the premier classical Chinese dance and music company, according to its website.

Ms. Kevic is a huge fan of Chinese cinema and as a result has become familiar with Chinese music in general.

She was astonished by the soprano’s voice.

“She is so expressive that I’m not going to say it doesn’t’ matter what she is singing, because it does matter a lot. But her expressiveness is overpowering to the point that what she is saying isn’t necessarily so important, because you know it’s important to her.”

Shen Yun’s website says, “The primary trait that distinguishes the singers of Shen Yun is their use of bel canto technique to sing Chinese text. This means that the singer must, while continuing to meet the challenges inherent in bel canto technique, retain proper Chinese pronunciation and diction. Today, these singers’ ability to do this is unparalleled.”

“Brimming with philosophical reflection about human life and containing deep layers of meaning, the texts go beyond the boundaries of nation, race, and culture, and have been fondly received and appreciated the world over,” the website explains.

Ms. Zekic was also amazed with the Shen Yun Orchestra and its conductor.

“Hen hao, very beautiful,” she said, using the Chinese words for “very good.” “Very interesting mix between the traditional instruments and Western European instruments. I think that was such a beautiful mix and I would love to know who did the music for it. The conductor was again top notch and everything I think came together beautifully.”

Ms. Zevic added, “This is my first experience and I think it was just an awesome one.”