Shen Yun ‘Something to Feel Good About’ After End of Pandemic Restrictions, Says Canadian Provincial Lawmaker 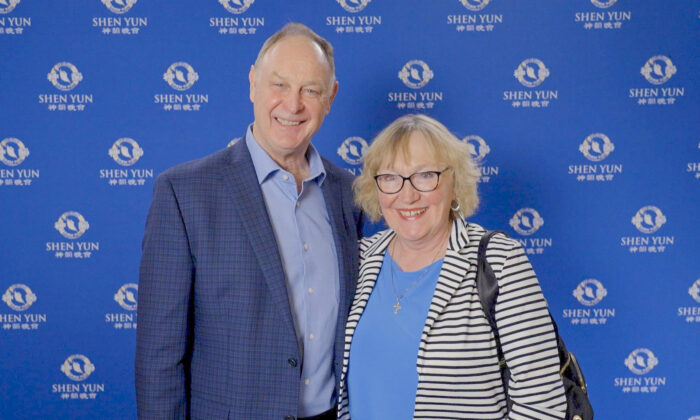 Ontario member of the provincial parliament John Yakabuski and his wife, Vicky, at the Shen Yun performance at the National Arts Centre in Ottawa on March 18, 2022. (NTD)

OTTAWA, Canada—Shen Yun Performing Arts is “something to feel good about” after two years of pandemic restrictions, says Ontario member of the provincial parliament John Yakabuski.

“To be able to come here this evening and see that I think is a real step forward for us, and I think for a lot of people,” said Mr. Yakabuski after seeing Shen Yun in Ottawa on March 18.

Mr. Yakabuski, first elected in 2003, has held cabinet roles in the provincial government and currently serves as parliamentary assistant to Premier Doug Ford.

New York-based Shen Yun is the world’s premier classical Chinese dance and music company that tours the globe each year, staging exhilarating performances to revive China’s rich culture as it was before decades of communist rule all but destroyed it.

The March 18 performance at the National Arts Centre in Ottawa marked the beginning of the Canadian tour of Shen Yun.

“It’s very impressive. It is absolutely breathtaking, the combination of the artistry and the athleticism in both the male and the female dancers,” Mr. Yakabuski said about Shen Yun.

“There’s a wow factor there, but also the beauty of the artistry, and particularly that dance near the end of the first part [“Plum Blossom in Spring”], the coordination, and the artistry between the dancers. Actually, my wife and I were commenting to each other [that] there’s a lot of practising going on here to be able to do that to such a level of perfection.”

Many of Shen Yun’s dance pieces depict characters and stories from ancient China, including adaptations of tales from classic literature such as “Journey to the West.” The company also tells stories of contemporary China, including the injustices happening in the country today.

“The stories are very good,” said Mr. Yakabuski, adding that how the company visualized the storylines “adds that much more to it.”

“The [Monkey King], that was quite interesting, and the one with the doctor and his daughter, and how it is persecuted even to this day in China,” he said, referring to one of the dance pieces that depicts the persecution of Falun Dafa adherents in China.

Falun Dafa, also known as Falun Gong, is a spiritual meditation practice based on the principles of truthfulness, compassion, and tolerance. The practice grew in popularity in the 1990s in China, with government estimates showing that between 70 million and 100 million people had taken it up by the late 1990s. Fearing the popularity of the practice, the Chinese communist regime began a brutal campaign of persecution against its adherents, which continues to this day.

“That was not just interesting, but maybe in some ways, quite disturbing and disappointing. … That’s how it’s still dealt with in the China of today,” Mr. Yakabuski said.

“The old China was culturally magnificent and had millennia of development of culture.”

He added that the fact that Shen Yun can’t be seen in China may encourage more people to come and see it in places where it can be freely staged.

“I think it actually draws a lot more people to want to see something that they would never see if they went to China,” he said.

Mr. Yakabuski said he encourages others to book their tickets to see Shen Yun because they’re “going to enjoy it.”

Fred Matern, a federal government employee, enjoyed both the visual beauty and the deeper meanings in Shen Yun.

“Right from the beginning, [there is that] sense of divinity, the idea of coming to earth from heaven, and the connection between heaven and earth. I thought that was very, very interesting.”

Jean-François Montigny, a senior manager with a communication company, praised the artistry in Shen Yun.

Uyen Vo, a manager with a bank, was also full of praise for Shen Yun.

Ms. Vo also noted the spiritual aspect of the performance and the stories depicted in the dances.

“It’s about forgiving, it’s about … helping each other out …. and the divine intervention as well,” she said, conveying her interpretation of the storylines.

Michelle Kennedy, who has seen Shen Yun eight times, said the performance “is just the most beautiful thing ever.”

“The music is great. It really underscores the story,” Ms. Kennedy said.