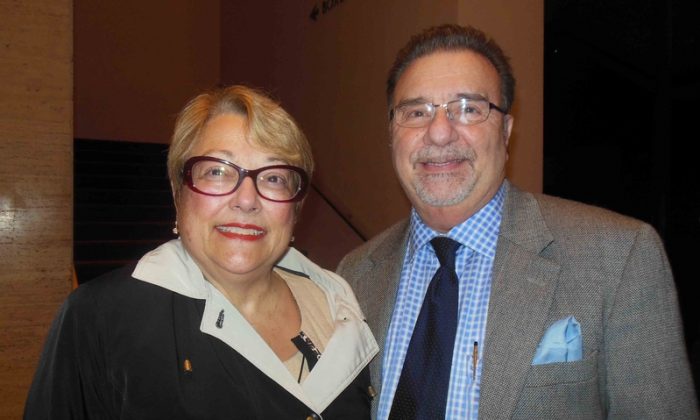 Shen Yun ‘Something Everyone Should See’

“The quality of the dancing and the music was really beautiful,” said Mr. Pannone. “The beauty of costumes, … the entire vista of the background, the music, the artistry, the dance.”

“It was a very moving experience, and it is something everyone should see,” Mrs. Pannone said.

The Pannones both felt Shen Yun touched their hearts.

“It was very touching,” she said. “Its tremendous beauty is very uplifting and makes you feel very happy to see it.”

“[It] very much touched our hearts,” he said.

Mr. Pannone is a chief nursing officer at a local hospital and Mrs. Pannone directs real a estate company, and also plays violin. They both loved Shen Yun’s music.

Shen Yun tours with an orchestra that has a Western symphonic base with the addition of traditional Chinese instruments.

“The music was beautiful. I loved the music,” Mr. Pannone said. “The music ties it all together.”

As an amateur violinist, Mrs. Pannone appreciated the skill and ability of the musicians to combine the unique sounds.

“It just reaches into your heart and makes you feel good, it’s beautiful … very impressive, very beautiful,” she said.

“I think music is a language that … draws people together, and that’s a beautiful thing.”

She was also impressed with the costumes and how the dancers coordinated with the state-of-the-art digital backdrop. “The way they come out of the screen, to dance on the stage. It was wonderful,” she said.

Her husband added, “I have never seen anything like that, where they seem to be coming alive out of the background and dancing. Very athletic, very talented.”

“It really showed a side of China that I was not familiar with. It was wonderful, very nice,” he said. “We saw pieces of China that were from the past, that people have not, perhaps, seen before outside of China.

“But that is culturally something that Chinese people and their ancestors hold very dear. It’s very nice to see that side of it, from what we know of China now.”

The Pannones felt Shen Yun came with a relevant message for today’s world.

“People should live in harmony with their environment,” Mr. Pannone said.

“Compassion and friendship,” said Mrs. Pannone. “I think it shows that it is possible, it is a wish that could come true.”