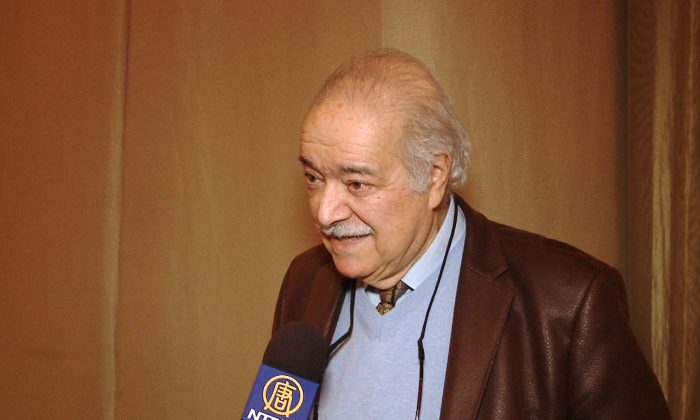 WASHINGTON—In more than twenty-five years as an art and theater critic for local TV program Arlington Weekly News, Rich Massabny has seen many shows in many venues in the Washington area. Shen Yun Performing Arts “is so different,” said Massabny. He saw Shen Yun Jan. 23, at the Kennedy Center Opera House.

“This is special, it is uplifting, it’s ethereal,” said Mr. Massabny. “I almost felt I could fly like a bird when I saw the performances.”

The local cable TV personality also hosts two shows of his own: an interview program called Conversations with Rich and a local celebrity chef cooking show, Rich’s Place. He has hosted both for more than 25 years. His shows reach as many as 7,000,000 homes.

According to the Shen Yun website, Shen Yun aims to revive the heritage of China’s 5,000 years of civilization. Stories from Chinese history come to life through the dance. Shen Yun presents classic and contemporary tales through Chinese dance.

The art form relies on traditional aesthetics and was passed down among the people, through the court, and in ancient dramas.

“The whole thing is inspirational! That’s why I said I could soar like a bird. I just felt I could fly away on that beautiful background.”

Mr. Massabny spoke of the projected, animated, backdrop that Shen Yun uses to add depth and expand the set visually. Several characters fly into view on the animated backdrop and then appear on stage as dancers.

Shen Yun dance performances are also accompanied by a live orchestra that incorporates Chinese instruments for a unique sound.

In addition, two sopranos also performed with Shen Yun. They sang bel canto style but in Chinese, the lyrics of their songs were projected on the backdrop behind.

“It reaches your heart and your head,” said Mr. Massabny of the songs. “I should be more sophisticated after doing this for 30 years, being a critic, I couldn’t help but feel this was so special, that I should act more sophisticated but I can’t, I just feel like a child again.”

“I don’t want to leave the theater. I’m parked downstairs but I am just re-living the wonderful sensations, it’s amazing. I have not seen anything like that in a theater.”

With reporting by NTD Television and Nicholas Zifcak