Shen Yun Shows What China Could Be 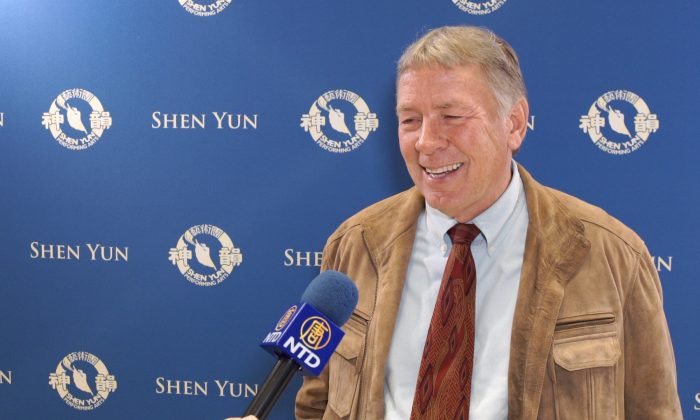 SALT LAKE CITY—Keith McCann is a catastrophe insurance adjuster, so work took him to San Francisco last year because of the fires. While he was there, he saw a brilliantly colored poster, and knew he had to see Shen Yun Performing Arts.

He called his daughter in Salt Lake City, hoping she could fly out to the Bay Area to attend a performance with him, but she has small children and it was much too short notice. So when the father and daughter saw that Shen Yun would tour to Salt Lake City, they got the tickets.

McCann was in Santa Barbara, once again for work, but the very afternoon of the performance, he flew back to Salt Lake City so they could attend the performance together.

McCann said it was moving on every level and the performance lived up to every expectation he had.

“The choreographers were able to convey human emotions through the dance choreography. I felt what they were feeling, watching them perform,” McCann said.

“The perfect example, the last performance, it spoke out about society today, and how I think we’re loosing focus and what’s important. It touched me. It was very meaningful for me. We think these thoughts, and then we see them presented on stage, and it’s beautiful, presentation of these dancers, and it causes one to reflect on what’s important in life,” he said.

Shen Yun is the world’s foremost classical Chinese dance company, and it was formed by artists in New York with the goal of reviving traditional Chinese culture.

McCann has spent some time living in China, and has a great love for the Chinese people. That was part of what drew him to see Shen Yun, and it was touching to see this culture brought back to life in a performance that actually cannot be shown in China today.

Shen Yun openly showed the goodness of people, McCann said, but in China today it is more of a private thing, because the people are aware of the Chinese regime’s oppression. People are guarded about their thoughts and actions, because no one wants to get in trouble.

“In this presentation tonight, it showed what the Chinese people might be like if they weren’t in such a restrictive environment,” McCann said. “It makes me want to find a way to get society to be more open.”

He hoped perhaps Shen Yun’s performances could inspire change in China as well.

“I think if given a chance, the Chinese people will embrace much of what was displayed tonight, or presented tonight in these dances, in these presentations,” he said. “They just need a chance.”

What McCann experienced himself was a theme of “family, and eternal progression.”

“I believe that a divine being sent us here on Earth because it would give us an opportunity to gaining wisdom, to learn to be obedient, and to develop faith,” he said. “And so much of the Chinese philosophy that was expressed tonight, I hold dear. I didn’t find opposition to anything that I believed in my life, and what’s created my moral environment. And so it was an inspiring evening.”