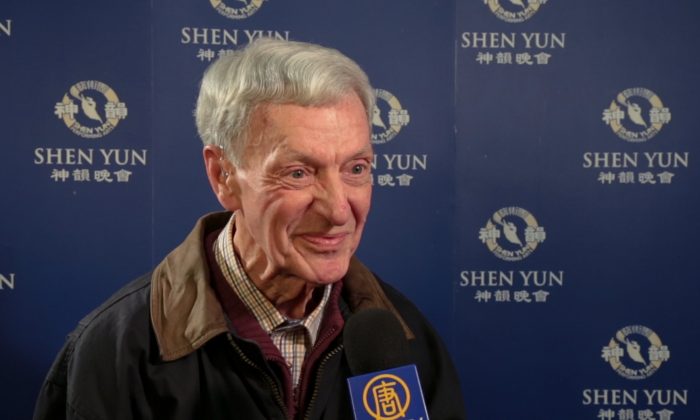 Arthur Farndell at the Shen Yun performance on March 6 at ICC Birmingham. (Courtesy of NTDTV)

BIRMINGHAM, United Kingdom—The journey towards truth and wisdom is in the heart of many teachers. And it was this aspect of Shen Yun Performing Arts that resonated with retired language teacher Arthur Farndell.

“I think we’re all in this life searching for the truth, searching for wisdom, beauty, knowledge and love, and [Shen Yun] exemplified this to the maximum degree,” he said after the sold-out matinee performance at the Birmingham ICC on March 6.

“Remember the story of the Monkey King? He wanted to find immortality. He wanted to find a teacher who could teach him how to live forever, so he travelled around the world looking for this teacher of spirituality and in the end he found what he wanted,” said Mr. Farndell. The Monkey King makes his appearance in the dance “Monkey King and the Dragon Palace” in this year’s Shen Yun performance.

New York-based Shen Yun Performing Arts aims to revive the authentic divinely inspired culture of China that has endured for 5,000 years before being almost wiped out under recent decades of communist rule.

Mr. Farndell recognised this in Shen Yun’s performance. “Chinese culture is one of great knowledge, talent, ability, and wisdom, how to live on this earth, but how to live for heaven as well,” he said.

“This life that we live on earth is just like a journey, but it’s only a journey, it’s not our real home, our real home is in heaven and that’s where we are all going, that’s our destination, and [Shen Yun] exemplifies that.”

Each year, a whole new performance is choreographed and costumed, drawing on inspiration from China’s rich history and legends, historical tales, and modern-day scenarios that represent traditional Chinese principles such as loyalty, compassion, kindness and bravery.

“The music and dancing were so well coordinated, the choreography was brilliant. Every performer seemed to be precise in all the movements, so elegant and so timed together. They all worked together brilliantly. Nobody was claiming personality, nobody was saying I’m really good, they were all allowing the natural culture of China to show through,” said Mr. Farndell.

As well as technical skill and form, Classical Chinese dancers must also master “bearing”, which is described by Shen Yun as “inner spirit”.

“In every movement from every performer, this was coming through to me – particularly beauty was being transmitted to me,” he said.

Reporting by NTD and Kat Piper