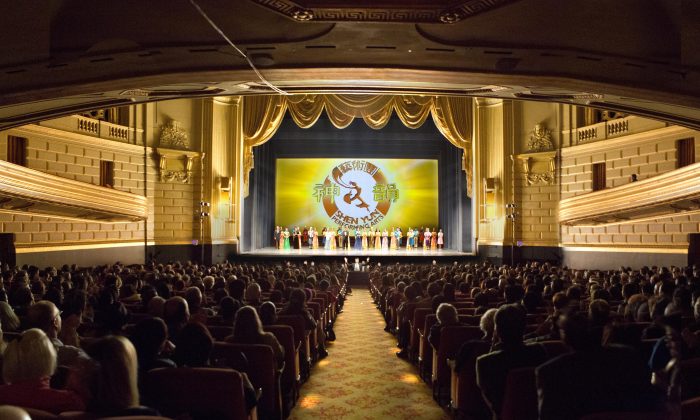 SAN FRANCISCO—As a pianist, composer, president of a music school, and frequent traveler to China, Mr. Louis was deeply touched by Shen Yun Performing Arts’ revival of traditional Chinese culture through art as he saw at the War Memorial Opera House Jan. 9.

The dance Mr. Louis saw in New York-based Shen Yun’s performance had emphasized the Chinese culture, he said, an aspect not brought out in the dance shown in China today.

Mr. Louis has been to China 40 times and has been closely involved with music education in the country. Thus, Mr. Louis said he was well aware that the divinely inspired culture which had flourished in China for thousands of years is oppressed and once nearly destroyed under the current regime.

“The Cultural Revolution was all about the destruction of the past and one shouldn’t look too kindly on a view that seeks to destroy its own past,” Mr. Louis said.

However, in Shen Yun, Mr. Louis saw not only the traditional culture in the classical Chinese dance, but representation of many areas of China through the ethnic and folk dances performed.

“You travel to many different places in China, and each one has their own sorts of dances and their food,” Mr. Louis said. “These wonderful distinctive characteristics.”

As a musician, Mr. Louis was deeply impressed with the orchestra as well.

“I think the music is very well integrated with the dance; I think it supports it very nicely,” Mr. Louis said. “There’s an expansion perhaps with the traditional set of instruments that are used.”

“The pipa and the erhu have very distinctive characteristics, and the violin is used in this context as more of a support and warmth and body,” Mr. Louis said. “Very nasal sounding instruments, very distinctive flavors that are indigenous almost to China, so it’s a perfect combination, really.”

Generations have passed since China came under communist rule, but Mr. Louis still sees tension in the country. “The Chinese people themselves are wonderful,” Mr. Louis said. “Around the world governments have corrupt people, people in charge; I think that’s really what the problem is.”

“Perhaps they haven’t been allowed to experience aspects of their culture, because maybe people feel fear,” he said. Mr. Louis added he hoped there would be more reflection on what the current structure of China has been built on.

Mr. Louis’s wife, a doctor of esoteric studies, had been deeply moved by the performance.

Shen Yun had brought her to “a place between earth and heaven; it just brings tears to my eyes,” she said. “It’s very, very pristine.”

She said Shen Yun was divine, and things were rarely as special as the traditional Chinese culture the company was trying to revive.

“Very seldom are things just this close to nature,” she said. “This allows you to connect with those things that people are forgetting about everyday.”

“It really touches your heart; so colorful and so gentle and it just brings you close to God; very special, very special,” she said. “The whole world needs divine things.”