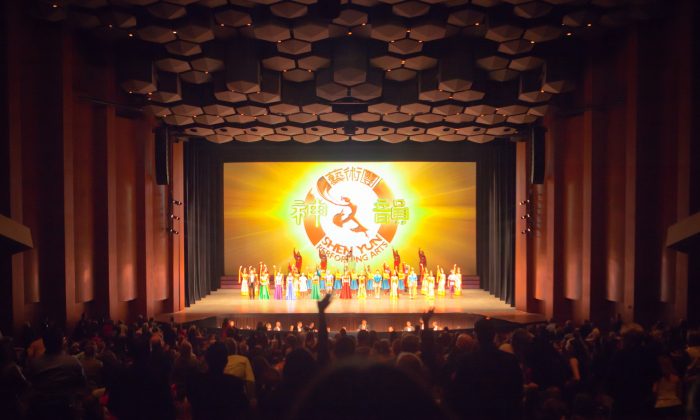 “I think the big thing here is that [Shen Yun is] still able to tap into that old cultural essence and old spiritual essence,” Mr. Ovalle said through a translator.

New York-based Shen Yun was formed in 2006 by a group of leading classical Chinese artists with a mission to revive to revive
the true, divinely inspired culture of China.

“Through the universal language of music and dance Shen Yun weaves a wondrous tapestry of heavenly realms, ancient legends, and modern heroic tales, taking you on a journey through 5,000 years of Chinese culture,” the Shen Yun website states. Now in its eight year, Shen Yun has become an international phenomenon.

Every year, the performance is different, Mr. Ovalle noted. “The culture is very, very rich and the dancers are spectacular. The colors, the music, it’s great.”

Also in the audience was Gavin Brown, who had just recently moved to Houston and saw an advertisement for Shen Yun. A friend of his had recommended seeing the performance to him, “and lo and behold it was advertised on TV,” Mr. Brown said. “It was like fate.”

Mr. Brown said the stories in the dances and the lyrics of the solo vocalists singing bel canto style weren’t just beautiful, but made him think.

“Of course, I’m getting a bit older now and change is hard. But I can change. I like this,” Mr. Brown said of the traditional Chinese values he saw expressed. “I like this.”

“It was an exceptional [performance] to go and see,” Mr. Brown said.