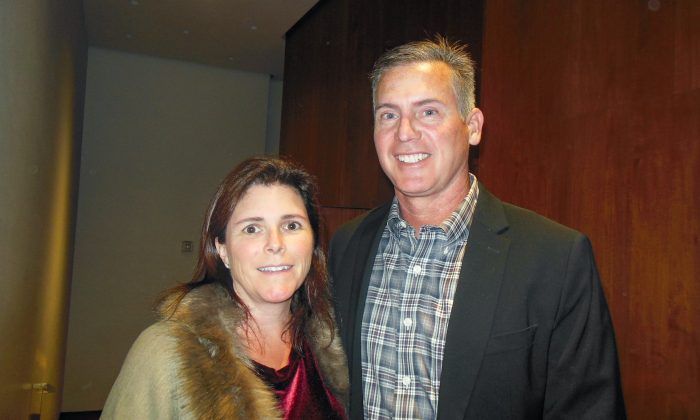 HOUSTON—Kimberly and Matthew Paggioli started off the new year with a unique event, seeing Shen Yun Performing Arts at the Jones Hall for the Performing Arts in Houston.

Kimberly, VP of marketing at Hobas Pipe, had always known China had a long and well-recorded history, but being in the audience on Jan. 1 really brought it to life.

“I think more about what we hear in the news about what’s happening today, about China … they’re able to show me their side of their history, and how rich their history is compared to my current belief about how things are,” Kimberly said.

New York-based Shen Yun was formed in 2006 to revive the authentic traditional Chinese culture, resulting in a performance of classical Chinese dance and music that cannot be shown in China today.

This very fact was a reminder that, the Paggiolis said, this wasn’t something Americans might think of. Communism is still very much alive in China, as is the suppression of freedom of belief.

“We don’t have that here in the U.S. It’s kind of shocking—the difference of that,” explained Matthew, who is director of contract management at Webber.

In the wake of the cultural revolution in China, the traditional culture was stamped out and religious groups were persecuted, so Shen Yun today travels with six companies to over 100 cities each season to bring this culture to the world stage.

Matthew added that we in the West haven’t had that much exposure to the traditional Chinese culture, much less art forms that were passed down and refined through the dynasties, like classical Chinese dance.

“It’s new to me, but it’s very interesting. I’m enjoying it a lot,” Matthew said. “It’s very elegant. The wardrobes, the colors are beautiful.”

Kimberly said she loved the artistry of the production, from the vivid costumes to the movement of the dancers. And the way it tied together with the animated backdrop allowing for creative use of space impressed her.

“It’s very colorful, beautiful scenery,” she said. “And I love the visual effects … this digital screen and how they come and go, move from the screen and back.”