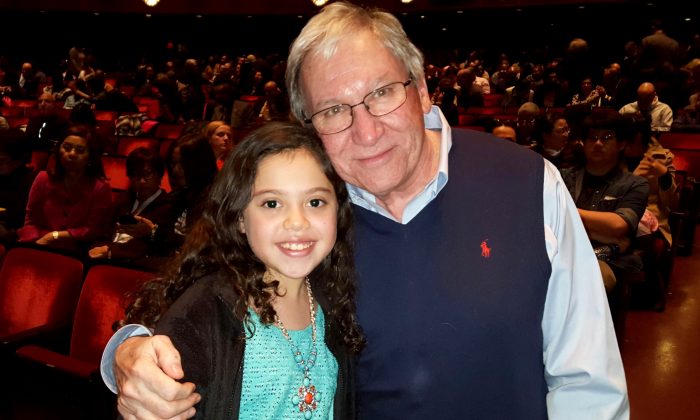 NEW YORK—Nine-year-old Sophia Chavez studies ballet and lyrical dance. On a school trip to see a dance performance, she and her classmates stumbled on advertisements for Shen Yun Performing Arts at Lincoln Center. Her interest was piqued.

“I had seen commercials and I wanted to go, and really, my dad and I are really interested in this, so we got tickets,” Sophia said. The New York-based company performs classical Chinese dance—which she liked—and tells stories from the thousands of years of Chinese civilizations, like the “Journey to the West” excerpt featuring the Monkey King, or what she called the “flying monkey.”

“I just like how it shows a lot of the culture,” Sophia said.

“It’s a very rich, ancient, and beautiful culture,” said her father, John DiMascio. Mr. DiMascio, a lawyer and former senior court officer for the New York State Supreme Court, has a doctorate in political science and during his education, he said he also immersed himself in East Asian studies, and spent time in that part of the world.

So seeing the different ethnic groups and dynasties from China come alive on stage through dance was an exciting experience.

“I feel most comfortable in an Asian environment, actually,” he said with a laugh.

Mr. DiMascio said that while Sophia enjoyed the mythical stories, he deeply related to the dances touching on contemporary China—because in China today, people cannot see a Shen Yun performance. When communism took power in China, it sought to eradicate the traditional culture with targeted campaigns like the Cultural Revolution. Temples were destroyed, lives were uprooted, religions outlawed, and freedoms were taken away.

The persecution of people of faith continues today, Mr. DiMascio noted, like the dance “The Steadfast Heart” pointed out. In that dance, an elderly couple are persecuted for following the ancient Chinese spiritual practice Falun Gong.

He said that he hopes the awareness would reach more people, because such persecution is an injustice. People who do others no harm—like the cultivators of truthfulness, compassion, and tolerance depicted in the dance—should “be allowed to live the only life that they have however they wish.”