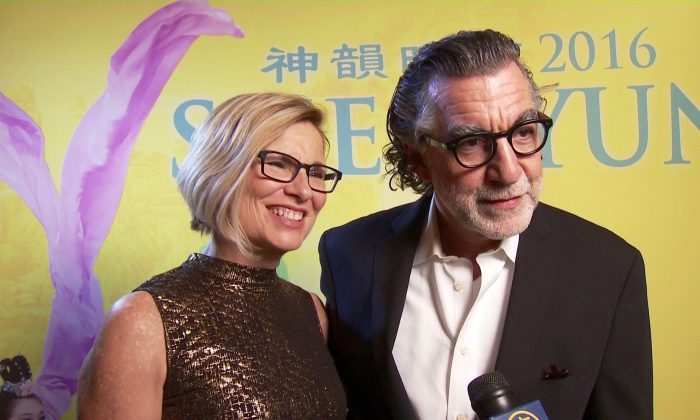 CHICAGO—George Mamo, executive vice president of the non-profit International Fellowship of Christians and Jews, is doing good across the world by organizing humanitarian relief efforts in times of crisis. Shen Yun Performing Arts, also a non-profit, is trying to save a whole culture.

Mr. Mamo and his wife, Kay, came to see Shen Yun at Chicago’s Civic Opera House on March 15, and witnessed what he called “the real China.” Ms. Mamo agreed and added: “The art, the culture, the people are beautiful.”

Shen Yun began in 2006 when a passionate group of performing artists had one wish, to revive the arts and underlying culture of China’s 5,000 history. The culture had been nearly extinguished under decades of communist rule.

One of the story-based dances depicts an encounter between monks and the Red Guards, teenagers conscripted to go around the country and destroy books and temples.

Mr. Mamo knew of this second-hand. When working with a coalition of charities and foundations to coordinate relief efforts for victims of the bombing in 1995 of the Murrah Federal Building, he was interviewed by a People’s Republic of China reporter.

“She told me how her family was taken by the Red Guard [and] put in a re-education camp,” he said.

Even today traditional culture and beliefs are violently repressed. Some of Shen Yun’s dances show the persecution of those who practice Falun Gong, a faith based on traditional Buddhist and Taoist principles, but also show divine intervention.

Mr. Mamo was heartened to Falun Gong “rising above the oppression of the Chinese government.”

And he felt the underlying spirituality of the performance, in particular, through one of the bel canto-style songs sung in Chinese by baritone Qu Yue:

“Countless lifetimes you have reincarnated
You came to the world for this, today!”

We have come back many times, Mr. Mamo interpreted this to mean, and “we are here for the moment to be where we are.”