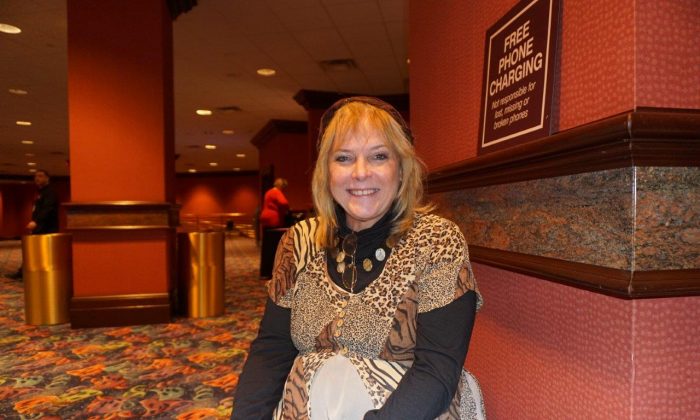 As a birthday present, her daughter got her tickets to Shen Yun.

A Shen Yun production features around 20 vignettes showcasing story-based dances that retell stories from China’s mythology, legends, folklore, and its 5,000-year history from ancient times to the present day.

The New York-based company features the world’s foremost classically trained dancers, along with a unique East-West orchestra and 3-D backdrops, according to the company website.

Davis said some of the things she found the most enjoyable were the depictions of fairies in the clouds and how their costumes allowed them to shimmer. She enjoyed the stories, and getting to know traditional Chinese culture through the expression of the dancers.

“What’s interesting to me culturally, is what we express as passionate, it’s expressed in the [Chinese] culture there in a much more subtle way, but it’s just as passionate if you’re paying attention,” she said.

“I just felt that things were expressed culturally softer and quieter, but to me there was passion underneath it… There was some funny humor in there too, so I liked that,” she said.

China’s ancient culture is said to be divinely inspired, and many of the stories show various aspects of this spirituality and the interaction between heavenly beings and people. Referring to some of the spiritual themes, Davis felt the deities portrayed in several pieces maintained a very lawful, yet benevolent presence throughout that would guide people to do what was right.

She had the sense that the deity represented was “much more involved and [there is] more respect and a relationship between the ancestors than we have here in the Western civilization.”

“I just think that the Chinese culture is much more tuned into ancestry,” she said. “You can see that that [Chinese] culture is 5,000 years … it has so much more depth than us.”

Davis felt that throughout the performance there was an underlying theme of maintaining a strong connection to one’s past, one’s traditions, and ancestors. And that is what she really liked about it.

“There was relationship between ancestry past and present that we don’t really have in Western culture,” she said. Without this link and respect for traditions, she said people end up feeling lost, or hopeless. She sees this in the Western civilization, and hopes we can learn something from the traditional values she saw in Shen Yun.

“I think this is nice because I like the way the Eastern civilization handles the relationship and affirms it,” she said.