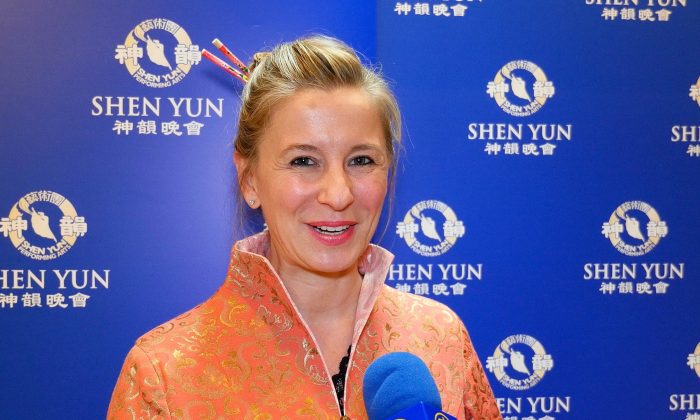 Theresa Napolitano saw Shen Yun Performing Arts for the second year, and found hope for humanity in the performance at Lincoln Center, on Jan. 13, 2016. (Courtesy of NTD Television)

This year, Ms. Napolitano said she saw hope. Not just because New York-based Shen Yun is reviving the once-nearly lost traditional Chinese culture, she said, but because of the profound impact of the art.

“Beauty, music, dance—it’s not an elective, it’s what we are as human beings,” Ms. Napolitano said.

Having seen Shen Yun twice, this time with her young daughter, Ms. Napolitano felt she gained a deeper understanding.

She said she was approaching the performance with a new appreciation for “value that this performance has to our bodies as human beings, and to our minds and spirits.”

The foundation of the performance is classical Chinese dance. It is an art form that has truly been refined over thousands of years, soaking up wisdom from every era, according to the Shen Yun website.

Shen Yun artists believe dance and music are fundamental aspects of human culture, and have brought this ancient, divinely inspired culture to the world stage through these forms.

This artistic revival was a bright spot for Ms. Napolitano in today’s world, as she explained with emotion in her voice.

“Today we are being confronted with the idea of taking out humanity from humans—and we’ve done that through taking out music, taking out art, taking out belief from the mainstream culture, when really it is about being a human being and understanding the color of the sky,” she said.

For instance, the ancient Chinese believed music could heal, that the pentatonic scale was directly related to five major internal organs, and the five senses. Ms. Napolitano says scientific research today has pointed in this direction as well.

“You listen to the frequency, [it] will affect our mood, our bodies, our health, our attitude,” Ms. Napolitano said. She added that although it might seem obvious once you say it, the idea that music can heal, and affect us internally, was really evident through the performance.

The spirituality she saw within the culture was not something strictly religious, but just human. She saw the mind and body reflected in the performance.

“The vitality of the performance really emphasizes that the art and music is not something that’s an option. It’s something that is essential to us as human beings,” she said.

Ms. Napolitano plans to come back again next year, and bring even more friends to see Shen Yun.