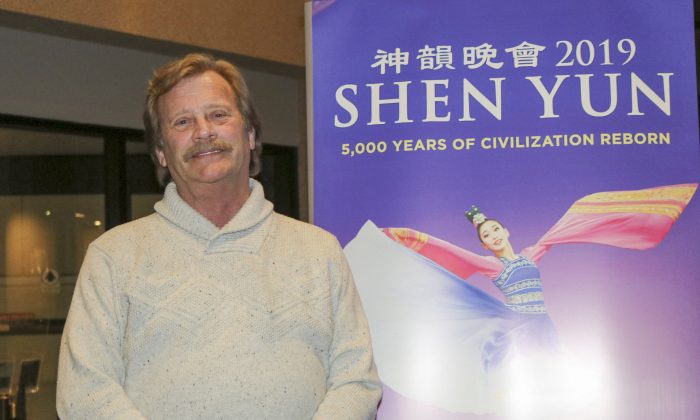 “[It’s] communication without words, a spirituality that is, whether you’re Chinese, American, it has a universality that presents itself quite well,” said Mr. Yergin. “You can close your eyes and I can put anyone in the roles, because it communicated so well and the stories are universal.”

The couple saw the New York-based company perform at the George Mason University Center for the Arts Concert Hall on March 12. Shen Yun aims to revive the divinely inspired traditional Chinese culture through performing arts, and the company’s foundation is the expressive, millennia-old art form of classical Chinese dance.

“All of the work they do in order to perform like that is traditional. All the stories they tell are historical, traditional stories, so they keep the history of the culture with the dances—just beautiful,” said Mrs. Yergin.

Mere beauty is not enough, there has to be meaning behind it, Mrs. Yergin explained, and Shen Yun has that—5,000 years of it.

The Yergins understood the importance of Shen Yun’s mission.

For thousands of years, the Chinese believed in the divine and virtues stemming from Buddhism, Taoism, and Confucianism made up the cornerstone of civilization. The five cardinal virtues of benevolence, righteousness, propriety, wisdom, and faithfulness, were the product of these three religions and found throughout thousands of years of history and culture.

But in the past century, everything changed. The communist regime preached struggle and shunned any power higher than itself, and systematically uprooted culture and tradition through violent campaigns like the Cultural Revolution.

Mrs. Yergin said that many people in America may be unaware of what China has lost, or that the modern communist state we see on the news today once had this rich cultural past.

She said Shen Yun was a beautiful window into the traditional Chinese culture, and a much needed reminder that the communist regime of China is still persecuting China’s people for their beliefs, as there is no freedom of speech or religion.

Mrs. Yergin said that despite the bad situation that is the reality today, Shen Yun presents the topic artfully, with a silver lining and hope for a way back.

“So the optimism and the faith—things will get better, or things can be better, and you can be spiritual and keep that close to you and tight to you. It came through,” she said.

Mr. Yergin added that “hope was never given up.”

“They never give up hope; that’s tied together with faith,” Mr. Yergin said. And it wasn’t just that the stories were optimistic themselves, but the artists passed on this optimism in their own effort to revive this traditional culture.

“[They] let people know the heart is still there,” Mr. Yergin said.

The Yergins felt the messages of these universal values present in the traditional culture, like the benevolence one character had for another, or the faithfulness in relationships, had value for our modern audiences as well.

“Maybe wake them up,” Mr. Yergin said. “We all carry these phones, but you’ve got to stop and be human. … We have a soul, we are human beings. Whether you are from China or I am from America, the values, all values always come through. Many are transient, but old values, the basics of helping a fellow when he falls down … that didn’t go away and it never does.”

“There’s got to be a real awakening every few years now. I think it’s time. Maybe that’s what’s happening,” he said.

With reporting by Jenny Jing.