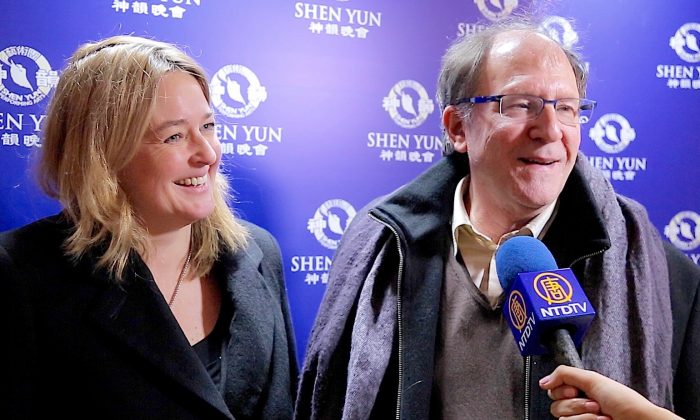 NEW YORK—Watching the Tibetan khata dance, the Sui dynasty court dancers, the scholars of the Orchid Pavilion, Michael Mongno felt like kicking his heels and gliding through the air himself.

“Just like the dancers,” he said after seeing Shen Yun Performing Arts at Lincoln Center on March 6. Mr. Mongno, a psychologist, attended the performance with Ms. Brooke Raymond, a librarian, and they felt the performance encompassed everything.

In bringing to life China’s 5,000 years, Ms. Raymond said the performance explored dance, art, history, spirituality, philosophy, religion, even the political climate of China today, and nature, and the “strength of the human mind.”

The two had no idea what to expect before attending and were grateful to have seen it.

Ms. Raymond said the performance was visually stunning, and profound as well. There were scenes of heaven, and she remembered the image of a glowing Buddha. “I felt like that symbolizes enlightenment,” she added.

With the imagery in the digital backdrop and the numerous costumes, she felt like she “was in a dreamscape. It’s gorgeous.”

The elements all came together to tell stories, like “The Lady of the Moon,” a well known Chinese legend, which has had many retellings. The dancers would descend onto the stage from the moon via the backdrop in wonderful colors, she explained, and then they would escape back into another world.

Another dance took place above the waves and in the clouds, and another one under the sea.

“It was just so moving,” she said.

The performance had Mr. Mongno thinking about origins: “You think about where we come from.” He enjoyed the ancient Chinese belief that we all come from the divine, “and the purpose here on earth is to do good so we can return back to heaven, which is very inspired, and a wonderful philosophy.”

He saw this philosophy in a dance about Falun Gong practitioners, who practice truthfulness, compassion, and tolerance. The two were very moved by the portrayal of this spiritual meditation practice, and saddened that the faith is persecuted in China today.

The couple meditate themselves, Mr. Mongno explained. It “quiet[s] the mind and allows divine love and energy to flow through.”

He felt it unbelievable that this kind of meditative practice is outlawed there. “So we certainly support this,” he said.