Shen Yun Shows Beauty of China, and How ‘All Is Lost With Communism,’ Says Washington Theatergoer 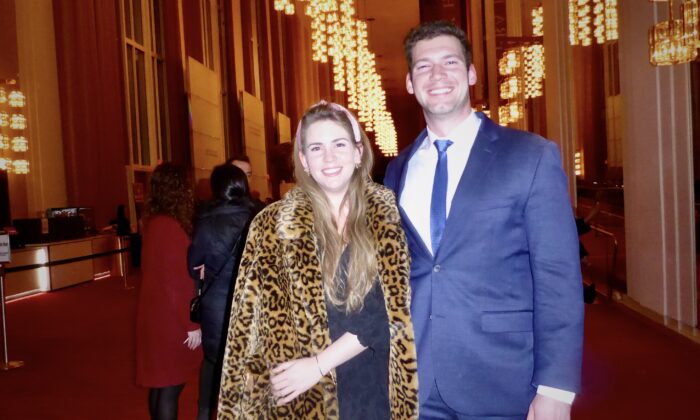 “I thought it was deeply moving. It was very beautiful,” said Mr. Reilly, consultant, on the opening night of Shen Yun at the nation’s capital on Jan. 24 at The Kennedy Center Opera House.

“The dancing and superb musicians and the music told the beautiful story and the ancient story. I’m glad I got shared with this part of the world,” he said.

It’s New York-based Shen Yun’s mission to revive the 5,000 years of divinely inspired civilization, and in it, Mr. Reilly and Ms. Montealegre found something universal.

“I think it was beautiful to get inside into Chinese culture, I personally hadn’t been exposed to a little more than a couple of movies,” he said.

“It was beautiful to see all the history of the Chinese people expressing themselves through art and beauty, costumes—dancing. The song lyrics are beautiful as well, and the message of hope and faith.”

Shen Yun‘s other tagline for its mission is one that intrigued Ms. Montealegre: “China before communism.”

“I’m originally from Nicaragua, another country that has been affected by, not communism, but by socialism,” said Ms. Montealegre, a UX designer. “My personal experience of communism comes from the Latin American version of it. China is suffering tremendously.”

After learning about traditional Chinese culture from the performance, Ms. Montealegre said her reaction was “I want to see more.”

“Because I think there is a moment that is deeply touching, touching the heart and soul. It is about joy and great sadness too. Persecution goes on in China. There is a message of hope too. Not just the Chinese people are hurt, but all people,” she said.

Ms. Montealegre said she knew the communist regime of China persecuted its people, who lack freedom of belief and expression, but Shen Yun‘s artful depiction deepened her understanding.

“The show is a good conduit to show the people what is truly going on. The Chinese Communist Party tries very hard to shut down the voices of the people who are trying to speak the truth. This is the way to spread the truth,” she said. “The truth of how people’s liberty is restricted is a big one. Also the truth of the destruction of culture, and the beauty of China.”

Ms. Montealegre said the only glimpse she’s ever had of China before communism came from movies. In Shen Yun, every detail from the period-style dress to the background scenery led to more interest.

“The scenes, the background, even though they are a small part of the show: oh, beautiful Chinese towns and beautiful houses they live in every day. And then the women dancing for the emperor out of respect, of the hierarchy, they have governance and leadership to take care of the country. It was so beautiful, but all is lost. All is lost with communism. It has consecutively proven that communism does not work,” she said.

“I am curious to hear how these came about,” she said. “It came from somewhere.”

“I would love to learn more about the Chinese history,” she said.