Shen Yun Shows a ‘Connecting Point for All of Us’ 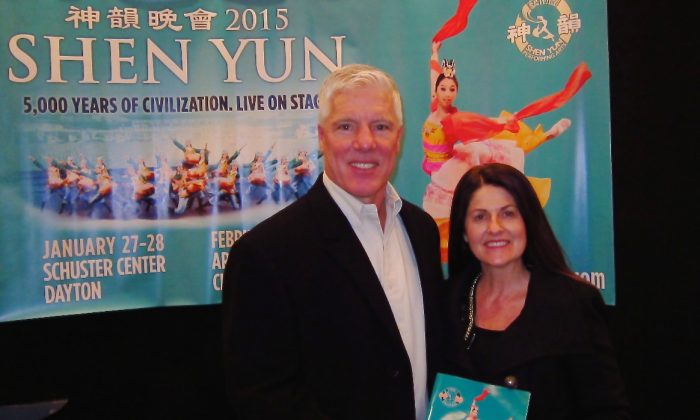 CINCINNATI—At the Aronoff Center for the Arts on Feb. 28, Shen Yun Performing Arts Touring Company captivated one particular theatergoer through its dancing and music. It showed him how cultures separated by thousands of miles and thousands of years, can still share some profound fundamental values.

Shen Yun is a New York-based dance and music company that endeavors to revitalize the ancient customs and cultural traditions of China through its performance. It includes classical Chinese dance, a full symphonic orchestra, digital backdrops, and elegant handmade costumes.

Tonight was Shen Yun Performing Arts Touring Company’s final performance in Cincinnati, before it continues on to Chicago for four performances running March 6 through March 8.

Tim Campbell, who works in sales and marketing for Bryan Equipment Sales, a company that specializes in outdoor power equipment, attended the evening performance with his wife, Tina.

The idea of striving for one’s personal growth was what Mr. Campbell felt he would take away from tonight’s performance. “We feel like we’re trying to grow each and every day so this was fun for us because it allowed us to develop and, you know, grow. We’re always on a path to grow,” he said.

Mrs. Campbell is self-employed and also works for the American Heart Association as a certified CPR instructor. She said that she “totally enjoyed it. It gave me a little bit of an insight in their culture. It was just very enjoyable to watch and to go through the different eras in time.”

What really resonated with Mr. Campbell were specific spiritual commonalities between his culture and that of the traditional Chinese culture depicted in the performance.

He explained, “It’s nice to see that other cultures have that same burning desire for salvation and they look to the heavens for that.”

Not typically into theatrics, Mr. Campbell couldn’t help being drawn into the performance and the expressiveness of classical Chinese dance. “The message really connected with me, so it made me feel very comfortable to be here,” he commented.

The message, for him, in addition to a shared desire for salvation, was the idea that in today’s world, one can still apply a faith-based lifestyle in terms of how we deal with the world, our lives, and our families. “It’s really a connecting point for all of us if you really think about it. We can be far away in travel, but close based on that belief system,” he said.

Mr. Campbell added finally, “Those folks up on stage made me feel good.”