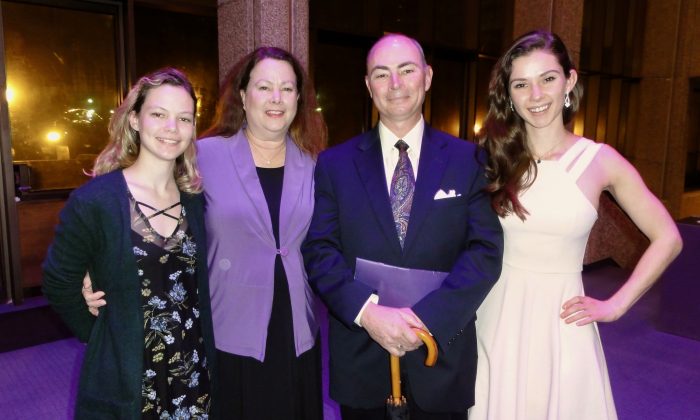 The Martin family had a beautiful experience at Shen Yun at the Mahalia Jackson Theater of the Performing Arts in New Orleans on Dec. 26, 2018. (Sophia Zheng/NTD Television)

NEW ORLEANS—Shen Yun Performing Arts promises more than a glimpse into 5,000 years of Chinese culture, the company website and ads profess a revitalization. And for many people, it’s not until they see the performance through that they understand why.

“It gave us a look into a culture that not many people have seen before, especially since it was a specific view that helped us understand what the communist regime doesn’t want us to see,” said Corinne Martin, who saw the Shen Yun performance with her family. “I thought that was very insightful and beautiful.”

Cindy and Rob Martin, together with their daughters Corinne and Lauren, attended a performance at the Mahalia Jackson Theater of the Performing Arts, on Dec. 26, in New Orleans, Louisiana.

China, once called the Celestial Empire, had a history and culture that flourished unbroken for 5,000 years, until 1949 when the communist regime took power. During the Cultural Revolution in the 60s and 70s, temples were razed, books were burned, and artists, intellectuals, and members of religious institutions were imprisoned or killed in a systemic approach to destroy traditional culture.

As a result of this, the China of the past several decades lost its connection to the 5,000 years that came before it. But in recent years, there has been renewed interest in learning about history and traditional culture, and Shen Yun is one major participant of this trend.

Founded in 2006 in New York by a group of artists originally from China, Shen Yun states that its mission is to revive 5,000 years of Chinese civilization and share it with the world through the universal languages of music and dance. Over the past dozen years audiences, around the world, show that this culture resonates with them still today.

“What I found interesting was this is a country that’s lost so many traditions [that] have been suppressed since the revolution, and now you have this group of people who are learning their belief, and something other than what the Chinese atheist communist [has taught],” Rob said.

“That was actually very inspiring,” Rob said. He found hope in the idea that belief could be an opportunity to create change, and that perhaps we were seeing it play out today.

The very idea that Chinese culture is a spiritual one is a surprise to some, but traditional Chinese culture is built on the belief of harmony between heaven, man, and earth. Principles from Buddhism, Taoism, and Confucianism create the foundation for this faith-based culture.

For Cindy, this was no surprise. Her father was in the U.S. Navy and her family lived in Taiwan, for a few years, where she had experienced this traditional culture.

Cindy saw the heavenly scenes in the finale of the program, tie back to the story of the Creator descending to impart 5,000 years of Chinese civilization in the opening, and thought it came full circle both artistically and in terms of narrative.

“The show was a whole story,” she said. And all of it was done through “visually stunning” means with “exquisite costumes,” and the dancing was incredible.

For Lauren, who minored in religious studies and had studied Buddhism and Taoism, what she saw on stage was an eye-opener.

“I think it was not what I expected it to look like in practice—it was very moving,” she said. “I thought it was just wonderful, peaceful—that’s the perfect word.”

“It was breathtaking, really. It was wonderful,” Lauren said.

Corinne noted parallels between the ancient Chinese stories and other cultures, and found something universal.

“I love history, so this was just an experience to me,” said Corinne. For her, the finale showed a battle between good and evil, as all cultures have such stories, with “ultimate goodness” coming through and winning before the curtain fell.

“It very much exemplified human behaviors, and what is magnificent about this is that it shows weaknesses as well as the hope that it gave the future,” Corinne said. “The last dance was about giving hope for the future by conquering something bad.”

Rob thought perhaps the stories he enjoyed most were the ancient ones “brought to life on stage,” because there were lessons from them that applied to our modern life as well. Plus, it really showed the scale of what they were seeing.

“I really enjoy that, when you realize how ancient China is—how rich the culture is,” Rob said.

With reporting by Sophia Zheng and Catherine Yang.