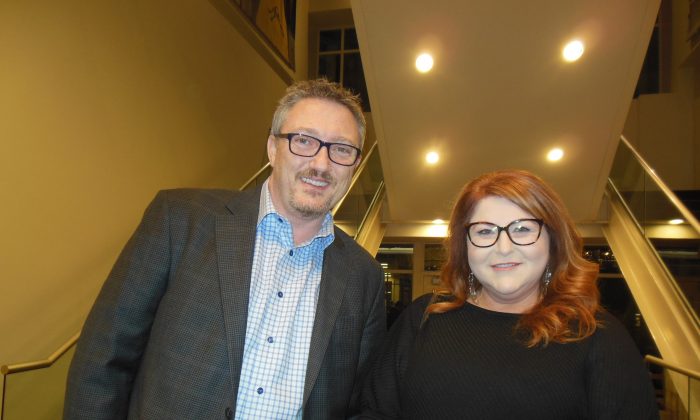 STAMFORD, Conn.—Audience members got a feast for the eyes when the curtain rose on opening night for Shen Yun Performing Arts in Stamford, Connecticut. Celestial maidens with flowing capes and bright gowns twirled among the clouds, signaling the start of a grand civilization on earth.

Among the audience was Elena Nepom and Brad Yeary, who were excited to journey through China’s 5,000 years of semi-divine culture and history.

“And the acrobats are phenomenal. Great costume. Great sound. Very enjoyable,” said Nepom, who is a director of operations for Charter Communications.

Nepom was impressed by the dancing and skills of the performers. She said, “Just how versatile the dancing is … things I’ve never seen before. And all the tumbling, the acrobatics are impressive.”

The pair saw the opening night performance at The Palace Theatre on March 29. New York-based Shen Yun is currently in the midst of its 2019 tour where six equal-sized companies are performing in sold-out shows around the world.

Through 20 vignettes of classical Chinese dance, folk and ethnic dance, story-based dances, and solo musicians, Shen Yun provides a glimpse into a cultural treasure that is nearly lost. This is because the company has a mission to bring back genuine traditional culture and values to the modern world.

“To me [what stands out] is the weaving of the stories of China and the oppression of the people, kind of weaving into the dancing and the cultural history [is] kind of interesting,” said Yeary, a marketing director for Charter Communications.

Shen Yun’s story-based dances draw ideas and inspiration from historical events as well as myths and legends from literature or tales passed down from generations. It also consists of pieces portraying today’s real-life human rights abuses in China like the persecution of Falun Gong, a spiritual discipline that is currently being persecuted in China.

Falun Gong, or Falun Dafa, teaches the principles of “Truthfulness, Compassion, and Tolerance,” where adherents seek to orient themselves toward self-betterment, taking responsibility, and putting others first.

Stories depicting the persecution in the production portray themes like spiritual devotion, the benevolence of gods, good and evil retribution, and the search for the meaning of life, according to the company’s website. These values are foundational to traditional Chinese culture and are not political in nature. Instead, they inspire audience members and encourage them to reflect on the modern world.

Yeary said art always finds a way to tell stories and bring out the positive of people.