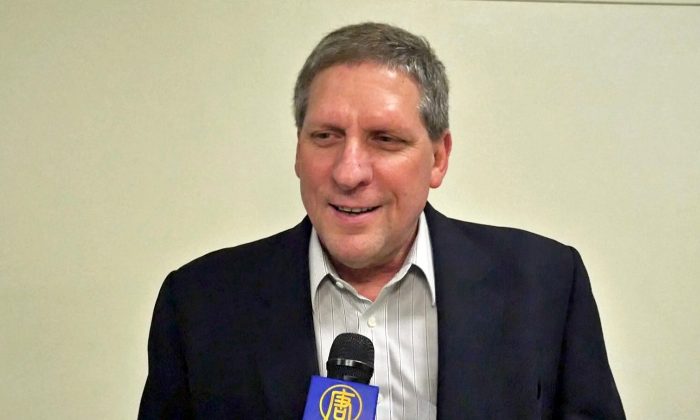 WICHITA, Kan.—Shen Yun brings together the East and West through its use of both Western and Eastern instruments. It has transmitted a “message of peace” that is universal. And, it presents ancient music and dance that once paved the way for modern dances around the world.

These were the aspects that Rod Firestone, vice president and general manager of Ashby Street Outdoor, an advertising firm, experienced when he saw the Shen Yun Performing Arts in Wichita Tuesday night, April 3. He described the show as fabulous, great; the colors were vibrant and magical.

Ancient China was based on spiritual principles. Today, however, modern China under the current communist regime has adopted a policy of atheism.

Much of Shen Yun is very spiritual, restoring those beliefs of ancient times in China. Thus, the rich 5,000 year history portrayed by Shen Yun can’t be shown in today’s China, according to the Shen Yun website.

Mr. Firestone liked the dances that depicted the communists repressing of people of faith.

Mr. Firestone, who openly identified himself as a Christian, didn’t completely identify with all the spiritual aspects in the program, but he did find common themes bridging Eastern and Western culture difference.

He found a universal message of peace throughout the performance, with the soprano soloist’s “The Moment of Salvation” striking a particular spiritual cord with him.

“I couldn’t tell if she was expressing a Christian theme or a Falun Dafa theme because it certainly felt Christian to me and so that might be something I might have to follow up on.”

Falun Dafa is a peaceful meditation practice originally made public in China. Many of Shen Yun performers practice Falun Dafa.

“That’s at the heart of the universe, really, isn’t it? Peace, love, and respect for humankind and the understanding that there is a something greater beyond us, eternally; that was expressed,” Mr. Firestone added.

Other universal aspects of the Shen Yun Performing Arts can be found in its music and dance. The Shen Yun orchestra incorporates both Eastern and Western instruments. The two stringed erhu was described by Mr. Firestone as fabulous.

Moreover, he connected many of the ancient sounds in Shen Yun with American rhythm and blues. “The old blues guitarists in the South, they didn’t learn that from any Chinese musician, so isn’t it interesting how the decades put those same melodies together?”

And, according to Shen Yun, much of today’s dance have their roots in classical Chinese dance in much the same way Mr. Firestone found common roots in the different styles of music.

Some of the dances, especially when interacting with the digital backdrop, require precise timing. Mr. Firestone described how he loved this aspect of Shen Yun and that it was very magical.

“I’m sure it takes a lot of practice to get that perfect, but as soon as somebody flew onto the stage, someone was coming up behind them,” Mr. Firestone added.