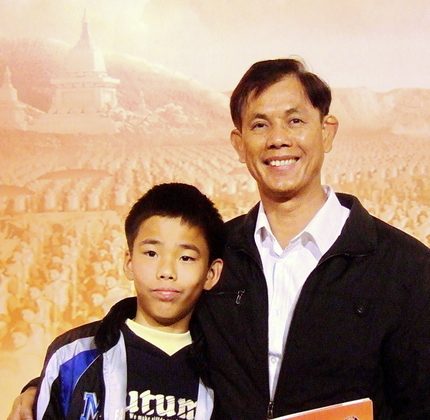 Mr. Guo was also excited about the digitally animated backdrops that transport the audience to another world. Projected behind the dancers, the hi-tech images lift the stage and set it amidst blossoming landscapes, deep forests, Mongolian prairies, or celestial paradises, says Shen Yun’s website.

“The backdrop was magnificent,” he said. “The Monkey King came out from the backdrop and directly showed up on the stage. It was very great. It was fabulous!”

Shen Yun’s performances include story-based and classical Chinese dance, and ethnic and folk dances, and solo vocalists, accompanied by an orchestra that blends East and Western instruments.

Mr. Guo was fascinated by all the programs and said they were well-arranged. He was most impressed by the lyrics of the songs song by Shen Yun’s award-winning solo vocalists. “I felt the meaning of the lyrics was to guide people,” he said.

Mr. Guo continued saying, “In our boundless lives, we focus on fame and money, but the programs in Shen Yun inspire people to think more deeply about life. It was really very good!”

Shen Yun Performing Arts has three touring companies that perform simultaneously around the world. Mr. Guo expressed his great admiration that Shen Yun could tour around Taiwan and the world. “It has great influence for the world. Through its promotion of traditional Chinese culture and arts, it purifies people’s mind and can make the world a better place.”

In conclusion, Mr. Guo said that Shen Yun was remarkable. “The colors of the costumes were matched beautifully [with the settings of the stage]. … It’s stupendous. The representation of the dance was also outstanding.”

‘Touched by the beauty’ of Shen Yun

Jian-Zhi Lin, district superintendent of Hunei District at Kaohsiung City said he was on cloud nine after the performance on March 9, saying, “I believe Shen Yun is the cream of the crop.”

Mr. Lin was most impressed by the dancing, commenting that “although I am an amateur when it comes to dancing, I am touched by the beauty that comes with every movement and every minute detail. I am simply lost for words to describe such beauty.”

According to the program booklet, in this dance, “Few heroes save the world in ragged robes and tattered shoes. But the 12th century Chinese monk Ji Gong, affectionately known as Crazy Ji, was anything but conventional. … In this story, when villains gang up on an innocent flower girl, Ji Gong’s clever tricks and quirky antics outsmart them to save the day.”

Mr. Lin had the highest respect for the superb performance by Shen Yun, believing it to be the best in the world. He emphasized that to truly understand a Shen Yun performance, and to further be enlightened by it, a person must have an open mind.

In concluding, Mr. Lin said he would like to help the disadvantaged in the community to also see Shen Yun. At intermission he said: “Next year, I want to use some available resources to bring the disadvantaged to the performance.”