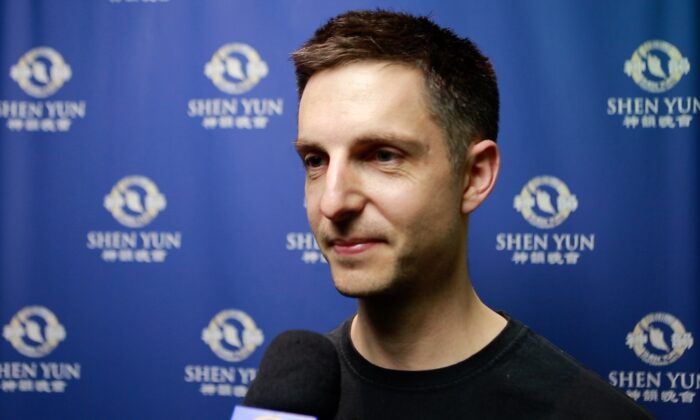 LONDON, U.K.—Covering the breadth and depth of 5,000 years of an ancient culture in two hours is no easy feat, but through a universal language, Shen Yun Performing Arts does just that.

Sebastian Mann, who consults for record labels, says he is by no means familiar with the divinely inspired traditional Chinese culture, but through the performance at the Eventim Apollo in London on Jan. 22, 2020, he could feel its meaning.

“It is very immersive and very well choreographed,” he said.

New York-based Shen Yun tours the world with a new program each year, typically consisting of 20 vignettes, made up of classical Chinese dance, ethnic and folk dances, and bel canto soloists, all before a unique animated backdrop and accompanied by an East-West orchestra.

The orchestra, which blends ancient Chinese instruments into a familiar Western symphony, made all the difference for Mann.

[The] orchestra really adds to it, adds a really rich dimension to it.
— Sebastian Mann

Good art draws you in like this, he added.

“I think—especially people who are doing things together in a choreographed way—added to the music, it really, I suppose, bypasses the rational mind, and touches you more in your heart,” Mann said.

Also in the audience for the London matinee were Michael McKeown, the owner of a distillery, with his wife Carmel.

Mr. McKeown felt it was an event of a lifetime, and full of surprises. Far from being just ancient history, he said it was a performance that included many moments of humor, and used technology that he’d never seen before in a backdrop: It bridged the artists on stage with the heavenly scenes on the screen.

“It’s just what I needed today,” Mrs. McKeown added. “So pure, so just so heavenly. It’s so beautiful and so delicate, and the movements are so, it’s just wonderful.”

At the back of the theater sat the Kemps with a friend, and the group said that even from the far end of the auditorium, they didn’t lose any of the energy the artists conveyed.

“It reached us tremendously,” said Robert Kemp, who owns a marina on the South Coast. He attended with his wife Barbara, and their friend Louise Clarkson.

“The color and the sound was absolutely amazing. Really, a great visual spectacle. Superb to see and I recommend anyone to see it,” he said.

“I think culturally it’s very much an eye-opener for people who don’t know anything about the Chinese culture. I think it’s very historic, and it kind of gives you a grounding in the different cultures that are still, I think, maybe not so well known in the West,” Clarkson said.