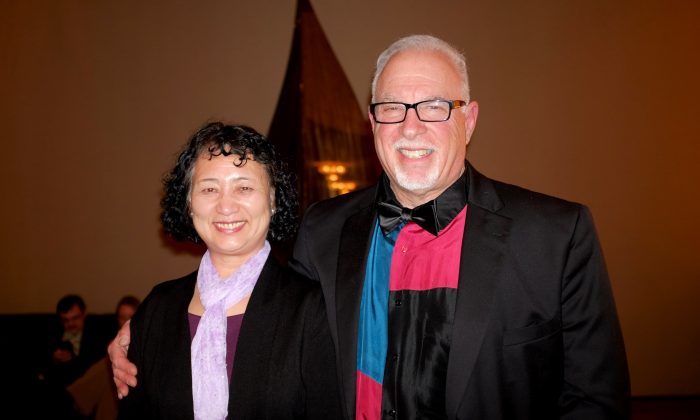 Bruce Wyman had a profound realization that Shen Yun brought the spirituality people so deeply need back to life, at Shen Yun in Washington D.C. on Feb. 20, 2016. (Jenny Jing/Epoch Times)

WASHINGTON, D.C.—Bruce Wyman had been enjoying Shen Yun Performing Arts, taking in the rainbow of colors and elegant, aerial form of dance, when he came to an eye-opening understanding.

This truly was a divine culture that he was experiencing, Mr. Wyman realized at the Kennedy Center Opera House on Feb. 20.

China was once known as the Celestial Empire, Mr. Wyman knew, but he hadn’t truly understood what that meant. China had been a nation with 5,000 years of continuous history where heaven and earth came together as one, where the culture was divinely inspired, and society followed principles for self-betterment.

All of this came through in performance—as that is the mission of New York-based Shen Yun.

“I heard the name Celestial; I had no idea what they were really capable of. No idea,” said Mr. Wyman.

He explained that he believes very much in the importance of spirituality, and it was mind-blowing to him that the Chinese had achieved such a highly developed level of spirituality at one point in time. “That’s phenomenal,” he said with wonder.

Yet under communist rule, this culture was nearly destroyed through systemic campaigns like the Cultural Revolution, a fact that Mr. Wyman was sad to bring up. The young Chinese today are atheist as a result of their upbringing, he said, and it saddened him to know they were not aware of what they had lost.

“We lost something. The whole world lost something,” he said. “The Chinese culture lost that, and we lost our way, too, to get to the higher realms. It’s a problem here.”

As a therapist, he works with many people, helping them with their behaviors and beliefs. There is so little spirituality left, he felt. And with spirituality gone from a culture, it is as if the culture is dying.

It made him sad to think of what is lost, but amazed and hopeful seeing it recovered in Shen Yun.

Because even if there are adults who have forgotten their spiritual side, “children, adolescents thirst for this.” It is human nature to not just want, but need spirituality.

“So Shen Yun brings to me the [answer],” he said. He was amazed he had never realized the work Shen Yun was doing prior to this performance, and expressed admiration and gratitude.

“I really admire that they are trying to bring that back,” Mr. Wyman said. “This is the first time I have realized this. I’ve heard the word Celestial Empire many times. No idea what that meant, no idea. … We needed that.”