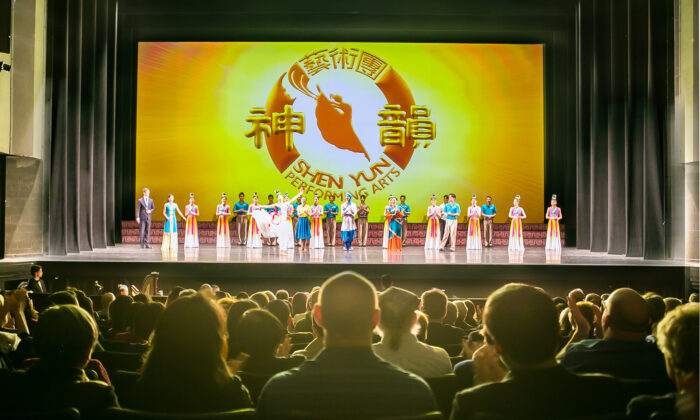 FAIRFAX, Virginia—Did you know that the Chinese word for medicine comes from the word for music? Theatergoers in Fairfax, Virginia, received a dose of ancient medicine when they attended Shen Yun Performing Arts at the George Mason University Center for the Arts on Jan. 16, 2020. They called New York-based Shen Yun’s music and dance “breathtaking,” “extraordinary,” and “peaceful.”

According to Shen Yun’s website, “In ancient China, one of music’s earliest purposes was for healing. It was believed that music had the power to heal the heart, enrich the mind, and harmonize a person’s soul.”

For Peggy Hart, the Shen Yun show was indeed a manifestation of spiritual medicine. It was only the first of two shows she’ll be attending this season. She’s already an avid fan of the Shen Yun Symphony Orchestra, which she attended twice, and purchased and donated tickets for high school students who couldn’t afford their own.

About the Fairfax performance of classical Chinese dance, Hart said, “I would say it’s a show you have to see, and the talent is extraordinary.” The Shen Yun fan works as a manufacturer’s representative for hospitality products.

“It’s so breathtaking. Really amazing, so I’m coming again on Sunday,” she added.

Hart is one of the audience members who marveled at the innate connection between music and medicine that Shen Yun’s emcees point out during the show.

Her enthusiasm for the music matched her impression of Shen Yun overall.

“I was inspired. The show made me feel very peaceful. I know there were political stories, which I think are important to tell, as well, and I’m saddened that they don’t allow this in China, where it really should be seen. But I’m so glad, especially the students that are in [performing] the show, are able to come here and live, and train, and do what they love doing, the dance, and the music,” Hart said.

Shen Yun’s mission is to revive China’s 5,000 years of traditional culture, including its rich artistic forms and spiritual beliefs. The artists depict heavenly scenes and beings on stage.

“It’s interesting to see the more religious side of it. I’m Christian, but I study Feng Shui, so I’m somewhat familiar with some of the traditions,” Hart said, adding that her health routine includes Chinese medicine itself.

Patty and Jamie Baisden are business owners in Virginia who attended the same show and were wowed by the healing power of sound.

“The music is just beautiful. I think it’s very interesting that music was a therapy, was medicine. That’s fascinating because, of course, music is therapy but it’s not put out as medicine. So, I like it,” Patty said.

Jamie added, “I like the tradition, I like the athleticism. It was very expressive. You could really feel the story through the motion and the movements.”

Shen Yun is in its thirteenth season and now has seven touring groups that travel the world, presenting an all-new show each season. The company is lauded for its combination of costumes, live orchestra, animated backdrops, and technically-elite dancers who are trained in classical Chinese dance’s unique expressiveness and characteristics.

Jaime felt that the stories in the performance with traditional Chinese themes, “it gives a different glimpse than what we’re hearing about in the current media. I think it was interesting that there was a number of the dances that went back to a Creator being and that went back to a peaceful feeling and a desire to have that within and that’s not something you hear very often today.”

“I think people would benefit a lot to get more in touch with themselves and the Creator and life and just be more balanced in their life,” Patty added.

With reporting by Lisa Fan, Jenny Jing, and Brett Featherstone.