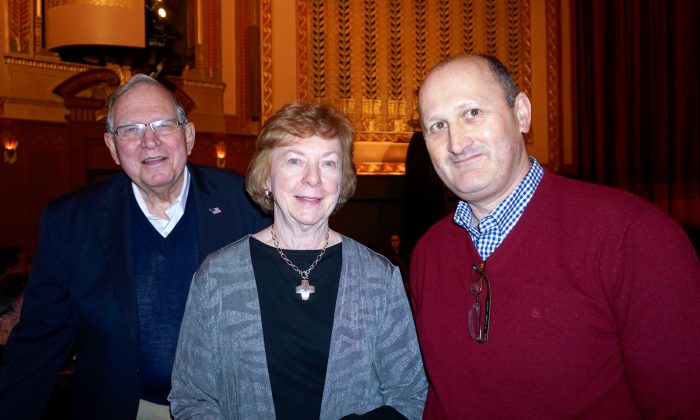 The answer to Father Trout’s questions is the Chinese Communist Party. Ever since the communists took power in China in 1949, they have steadily eaten away at the traditional values of the people who long cherished them.

“The traditional spirituality is very beautiful, when they talk about honesty, integrity, and justice,” said Father Trout, with a lilting Irish tinge to his explanation.

It was a pity, he said, that these values, which have nothing threatening about them, have been suppressed in China.

These are “something that you should be thinking about, rather than pushing down,” he said. Father Trout serves as the Catholic priest of St. Joseph, with a congregation of about 4,500 families, in Libertyville, Ill.

For 5,000 years, the Chinese honored the will of Heaven, and Shen Yun, a company that formed in New York in 2006, aims to restore the legacy and beauty of that tradition.

An orchestra combining instruments from both the East and West, hundreds of handmade costumes, and a digitally animated backdrop, all come together to support dances that tell the stories of traditional China or introduce the different peoples of China.

These latter dances, showcasing the Mongolian people, the Manchurians, the people of the northern countryside, appealed to Father Trout, who found the diverse ethnicities beautiful.

Father Trout was the guest, at the Civic Opera House on March 15, of Eileen and Larry Frederick.

“How they have somebody on the stage, suddenly lift up into the sky” was astounding, she said of the animation working in conjunction with the dancers.

“It’s a magnificent production,” she said, which exceeded her expectations.

For Father Trout it was a chance to peek behind the somewhat hidden culture of China, past our perception of “made in China,” to the richness of the culture behind—a culture imbued with elegance, grace, courtesy, and modesty.

The Chinese “should be proud of it and proud of their tradition and their culture. It’s non-threatening. It’s a beautiful, beautiful thing,” he said