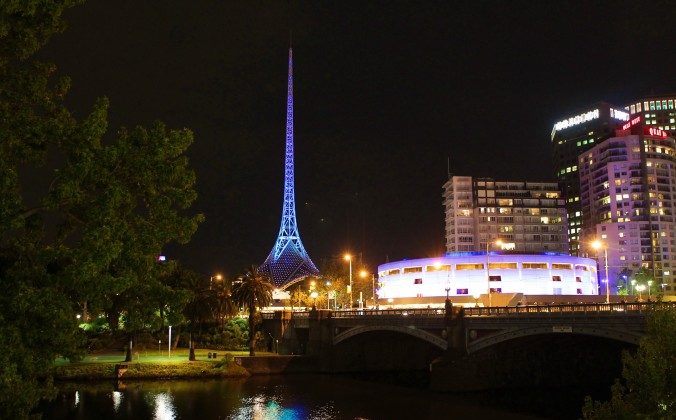 Shen Yun Returns to The Arts Capital of Australia

MELBOURNE, Australia—Melbourne, the World’s Most Liveable City for a fifth year in a row, has long prided itself as Australia’s arts and cultural capital. It also claims the blue ribbon as coffee capital and has a world class sports hub comprising Melbourne Park, the home of the Australian Open, AAMI Park and the MCG.

With its theatres, galleries, laneways and cafes Melbourne’s architecture spans colonial and modern and has an arts precinct with the Arts Centre Melbourne and its iconic spire at its heart.

The jewel in the crown of the Arts Centre is the State Theatre with over 2000 seats and one of the largest stages in the world. It is furnished with luxurious red velvet and carpeting complete with heated hand rails reminding theatregoers that no expense has been spared for their experience and enjoyment. If you look up you will see an amazing ceiling with 75,000 tiny brass domes.

The State Theatre is the home of Opera Australia and The Australian Ballet but for five days, Feb 20 to 24, the splendour of Shen Yun Performing Arts World Company is holding court.

Melbournians have their choice of world class performances, and those with discerning taste will be wasting no time securing their seats to see Shen Yun at the State Theatre.

“Through the universal language of music and dance, Shen Yun weaves a wondrous tapestry of heavenly realms, ancient legends, and modern heroic tales, taking you on a journey through 5,000 years of Chinese culture. Its stunning beauty and tremendous energy leave audiences uplifted and inspired.”

“I would like to take this opportunity to welcome the return of Shen Yun Performing Arts to Melbourne, Australia.

As the Shadow Minister for Multicultural Affairs I am pleased to have such a popular and inspirational Chinese dance and music company perform at one of our cities greatest venues – the Melbourne Arts Centre State Theatre.

I wish to extend my most sincere congratulations on your continued success, captivating audiences on the world’s biggest stages, showcasing the richness of classical and traditional Chinese culture through performing arts.

I commend Shen Yun’s contribution to the revival of traditional Chinese culture and the promotion of Chinese and Western cultural exchange.

I wish you the very best of luck for many more years of continued success.”

Melbourne’s own Judith Durham, singer, classical pianist, song writer and composer who stepped into international stardom as the lead singer of The Seekers was humbled by the Shen Yun performance.

“The discipline and the inspiration that the artists have shown us through the performance has been truly, truly remarkable and I’m in awe,” she said. “I really encourage everyone to go along and see the show. I really think that this is something very, very special.”

The hit musical “Georgy Girl—The Seekers Musical”, a true story of The Seekers on their rise to international fame is currently playing at Her Majesty’s Theatre in Melbourne.

One of Melbourne’s best known choral and orchestral conductors, Douglas Heywood OAM thought Shen Yun was stunning. “The energy, the colour, the movement, the sound of the orchestra, it’s such a relief from all the turmoil outside in the world,” he said. “I love the orchestra! It’s a really rich full sound. It would be a joy to conduct them … It’s really, really lovely writing by the composers and arrangers.”

Tracy Bartram is a professional comedian, entertainer, broadcaster, singer, motivational speaker and writer felt there was something magical about Shen Yun.

“It’s totally divine. I really felt the higher power of the performers coming from a higher place,” she said. “They’re all working from their hearts. They’ve just got so much commitment.”

Shen Yun will be performing six shows at the State Theatre, Arts Centre Melbourne from Feb. 20 to Feb. 24.

With reporting by Leigh Smith