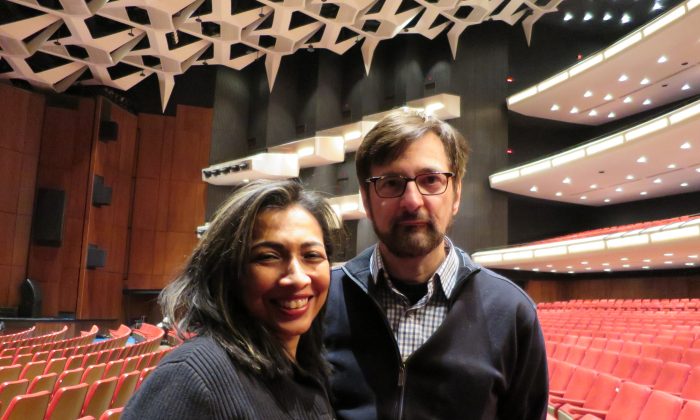 “We had a very good time, it’s spectacular,” said Dr. Gilbert, who serves as the Director of Gynecologic Oncology at the McGill University Health Centre, and is a professor in the Department of Obstetrics & Gynecology.

“We are very pleased we came—everything was perfectly well run.”

The performance had many thrilling surprises, she said, and she was moved by Shen Yun’s effort to preserve traditional Chinese culture.

“The costumes are beautiful and the dances are wonderful but we were also touched by [how] it represents the lost culture,” she said. “That makes it special.”

New York-based Shen Yun is a classical Chinese dance and music company that aims to revive 5,000 of divinely-inspired Chinese culture. The company was formed in 2006 and has since grown to four touring groups that have performed to millions around the world.

Dr. Gilbert was also impressed by Shen Yun’s story-based dances, some of which depict modern-day human rights abuses in China. These stories are important, she said, and will help bring about social change.

“The Chinese government should recognize it—someday they will recognize these things,” she said.

Cardiologist Jacques Gagnon was also in attendance at the Monday evening performance with his wife and 6-year-old twin daughters.

“It actually immerses us in a spirituality that is different,” he said. “A mythology that we are not used to.”

He also appreciated the digitally animated backdrops in Shen Yun, which provide vivid context to the story-based dances.

“Sumptuous stories, sumptuous sets, and done with finesse,” he said. “The costumes are very colourful, and indeed well made.”