Shen Yun ‘Reminds people of the beauty of classical art’ 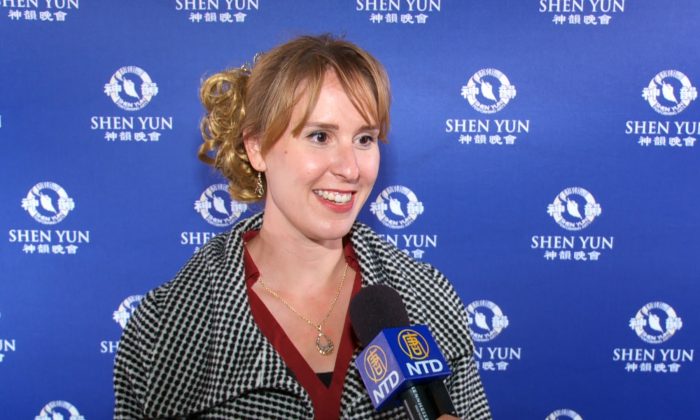 MELBOURNE, Australia—Musician and singer-songwriter Stephanie Foster was reminded of traditional, human values as she watched Shen Yun Performing Arts at the Regent Theatre on Feb. 13.

“[T]he underlying messages are about loyalty and faith, and being a good person and morals,” she said.

“I definitely agree with all those values and I think it’s something that we should be reminded of in our lives,” she said.

Foster, a solo artist who goes by the stage name Duxie Franklin, is a multi-instrumentalist who plays violin, piano, guitar, and ukulele. She felt that the music of Shen Yun, which blends Chinese and Western instruments, conveyed a powerful message.

The piece showing Mongolian horsemen riding on the Mongolian plains for example, was “strong and powerful, brave and majestic,” she said.

Foster was particularly drawn to the contemporary vignette about the persecution of Falun Gong in modern China.

“[It sent] a message of what [Falun Gong] is about, what that belief is about, and that it’s quite a beautiful spiritual belief, and what’s happened to [Falun Gong] in China,” Foster said.

Foster said that the whole production, which is largely classical Chinese dance, reminded her of the beauty of art and how it is beneficial to people and the world at large.

“[I]t reminds people of the beauty of classical art, and some sort of a high spiritual power to do good and to be good and to care for each other.”

A Very Traditional Form of Expression

Miriam Orwin, a lawyer who established the Centre of Creative Healing in Melbourne, was impressed by the dancers’ skill level and said it wasn’t like any ballet she had seen.

“I could see a very traditional form of expression. So it wasn’t like the normal ballet that you’d go and see.”

“They were very skillful, the dancers were very brilliant, but you could see the traditional movements,” she said.

Classical Chinese dance is a comprehensive dance system of its own, tempered over thousands of years in imperial courts and ancient theater, soaking up the wisdom of each dynasty. Shen Yun uses it as the base for the whole performance of some 20 vignettes, including many story-based dances.

Orwin especially liked how each story had a moral to it.

“I liked the way that it takes the dance to another level, that it’s actually like a story with a moral,” she said.

As a fan of Chinese culture, Orwin was impressed by Shen Yun’s ability to showcase China’s 5000-year-old culture through song and dance.

“[It] was really worthwhile going to see something unique and different that you won’t see unless you come to this show,” Orwin said.

“It really shows the original high level of exquisite Chinese culture that really has been from eons from before.”