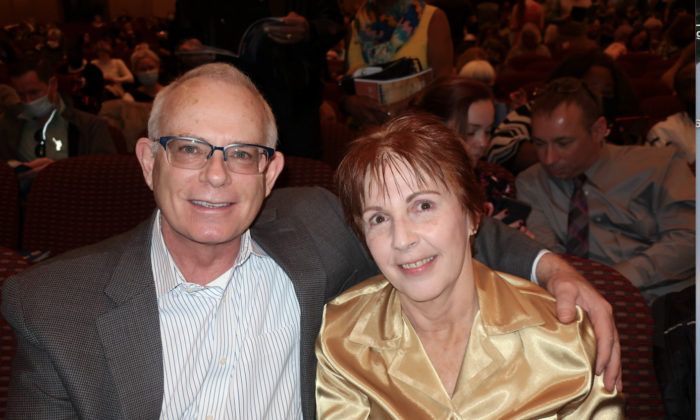 ST. LOUIS, Mo.—Art is a form of expression that goes beyond speaking. Shen Yun Performing Arts uses dances and music as their tool of expression to tell the world about the beauty of China before communism.

Michael Davis who worked in publishing and Laurie Davis, a retired Air Force member shared that something that really struck them with Shen Yun‘s performance was the company‘s “ability for religious expression and freedom,” Ms. Davis said.

She emphasized that freedom of expression is important “in today’s world, in China in particular, but even to some extent even in the United States. It was pretty powerful to me. We have to be careful.”

Noticing that the matinee performance boasted a full house, Mr. Davis observed that there are many people looking for truth.

“Well obviously the people are hungry to hear stories like this and sometimes when you look back at the past and see the way people expressed themselves through art it gives you hope for the future,” he said.

New York-based Shen Yun shares stories of compassion, love, and humor with audiences around the world. Their dances also include spirituality and respect for the divine.

“It was definitely spiritual and it crossed the boundary of just being a Christian. It was more of a universal spiritual appeal and I think that applied to the freedom aspect too,” Ms. Davis said.

Understanding that Shen Yun is censored in China, Ms. Davis was again reminded of the importance of freedom.

“You can probably apply it in any country and I think it speaks of the importance of talking about the past and making sure that these stifling of freedoms or taking away those freedoms … doesn’t happen again. I mean especially not right now, but the truth is it is happening in some places,” she said.

With the pandemic impacting the world, Ms. Davis feels that experiencing Shen Yun has told her that this freedom was even more crucial than before.

“I think at any time it has great value, but I think so even more so during the pandemic because it reminds you that we are all people and when you see that spiritual message that crosses boundaries of countries and things like that it reminds you of all the things we have in common as human beings and the things we need to value as human beings all as one,” she said.

The pandemic has certainly brought about divisiveness and mandates that limit freedom. Many audience members have expressed that seeing Shen Yun has reminded them of the beauty in human interaction and that hope can be found.

I think anything you can do that reminds us of the humanity in each other gives us a little hope that we’ll start to get beyond all this divisiveness.
— Laurie Davis

“I think anything you can do that reminds us of the humanity in each other gives us a little hope that we’ll start to get beyond all this divisiveness, whether it’s in this country or in the world, because people are really hurting right now,” Ms. David said.