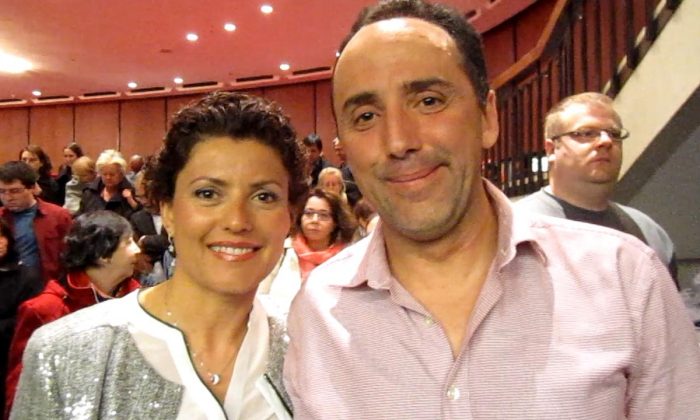 MONTREAL, Canada—Bankers Bilel and Anissa Zeribi are not only in the same profession but also of the same mind when it comes to appreciation of Shen Yun Performing Arts and its mission of reviving the traditional culture of China.

The couple was among the audience at Place des Arts on Saturday evening, April 30, enjoying the premier classical Chinese dance and music production.

“It was great, amazing,” said Mrs. Zeribi, who is executive director of corporate banking at CIBC in Montreal.

“The costumes, the dance, everything, the stories behind it—it was very beautiful,” said Mr. Zeribi.

On another level, the performance also made him think of how “everybody should respect each other and live in peace, harmony,” he said.

His thoughts reflected the story line behind two of the dance stories in the Shen Yun performance, which depicted the repression of the Falun Gong traditional Chinese spiritual discipline in modern-day China.

“To know some people today are persecuted for the way they want to live their lives, that’s unfortunate,” Mrs. Zeribi said, noting that it “just reminds us how important the Chinese culture is.

And “how much it’s brought to our culture today,” Mr. Zeribi added.

True to the company’s mission, the performances of New York-based Shen Yun have been described as a renaissance of traditional Chinese culture.

Renaud Gilbert, former ombudsman of French Services at Radio-Canada, was impressed with Shen Yun’s colourful costumes. The company’s objective in its costume design is to achieve an “authentic presentation of the attire that comes from China’s divinely inspired traditional culture, and a consummate stage effect,” according to the Shen Yun website.

“I find the dancers are very professional and it’s refreshing to see these magnificent costumes,” said Mr. Gilbert.

“The usage of the scarves—it’s like an extension of the body, the costumes. It’s really interesting and well done.”

Mr. Gilbert was with Radio-Canada for several decades before his retirement in 2007. He started his career as a reporter in 1970 in Ottawa, and gradually assumed more senior roles including the French network’s parliamentary bureau chief in Québec City. He became the first executive director of RDI (Réseau de l’information) in 1995 and later Ombudsman, French Services, with Radio-Canada in 2000.

With an appreciation of classical music, Mr. Gilbert regularly attends symphony orchestra concerts, so he also appreciated the classical Chinese dance and music at Shen Yun.

“It’s a grand culture, the Chinese culture,” he said.

As a former journalist, Mr. Gilbert took note that Shen Yun comes from New York and is bringing the wonders of ancient Chinese culture to people around the world, restoring the traditional culture that has been nearly lost in China today.

“It’s a company that contests what is going on in China—it’s good,” Mr. Gilbert said. “They are defending their point of view.”

“Shen Yun’s goal is to revive the authentic and original manifestation of traditional Chinese culture and art,” according to Shen Yun’s website, explaining that the communist regime in power in China has twisted the arts into propaganda tools.

That effort has seen the regime there systematically suppress and destroy traditional Chinese culture and enforce atheism through campaigns like the Cultural Revolution. Shen Yun was founded on a mission restore the true traditional culture of China. Audiences around the world have praised the effort.

“It’s spectacular. I like it very much and I learned many things about the culture of China,” said English teacher Carla Quinonez.

“And the coordination is incredible. It’s a great show,” she said.