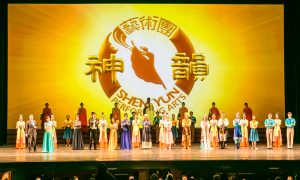 Shen Yun Reflects on Meaning of Life for Couple

TORONTO—Watching Shen Yun Performing Arts at the Four Seasons Centre on March 1, 2017, was a night to remember for Hector Guerrero and his girlfriend, Taiwanese-born Jhih Jia Liou.

“This is fantastic. I’ve never seen anything like it. It’s very well-rounded, it’s got colour, it’s got action … I’m just really mesmerized about it,” said Mr. Guerrero, an IT project manager.

Shen Yun, the world-renowned Chinese dance and music company, is currently touring the globe as part of its 2017 tour. The Shen Yun World Company, one of its five touring companies, is now gracing the stage of Toronto’s Four Seasons Centre for the Performing Arts, a prestigious theatre known for its excellent acoustics and beautiful architecture.

Established in 2006 in New York, Shen Yun brings to the stage performances of Chinese dance and music rooted in 5,000 years of civilization, spanning a journey from what are believed to be its divinely inspired origins to today’s contemporary China.

Mr. Guerrero was particularly impressed by the story of Falun Dafa, the peaceful meditation practice rooted in Chinese culture that is currently being persecuted by the communist regime in China.

“The message is fantastic. It’s a lot about compassion,” he said, adding that he could not understand why such a good practice is persecuted.

The message he got from seeing Shen Yun was about looking inside oneself and reflecting. “Just give the best you can in the world and find out what is your purpose instead of being so materialistic,” he said.

Watching the performance triggered many emotions–from joy to sadness to laughter. “I had many feelings throughout the show and there was not a moment that it was down. It always kept you expecting something new. A very well-rounded show,” he said.

Ms. Jhih Jia Liou was also touched by the performance and the spirituality it embodies.

“It’s a beautiful show. I loved those songs. It really makes you review your life, what’s your purpose in your life, because I was searching for the next step in my life and it reminds me that you need to be a good person and be kind to the world,” she said.

Having been raised in Taiwan, Ms Liou said she could recognize the stories and the traditional beliefs depicted in the performance. She also identified with the persecution experienced by Falun Dafa practitioners.

Falun Dafa practitioners “believe in truth and kindness and tolerance, but such good things are repressed [in China]. It connects to me a lot—I actually grew up in Taiwan, and for the whole time we felt the pressure from China as well,” she said, noting that she was harassed on her last trip to China for having a Taiwanese passport.

Mr. Liou says she treasures the time she spent watching the performance with her partner and said she will take very good memories with her.