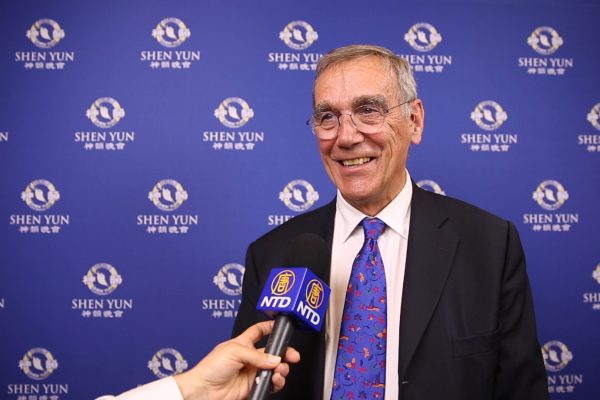 MONTPELLIER, France—Currently a member of the supervisory board of an investment company, Mr. Jean-Marie Laporte has traveled with wonder through the Middle Kingdom, to the rhythm of the ethnic and folk dances of the 5,000 years of Chinese civilization in the audience of Shen Yun Performing Arts.

“It’s a very moving show because we’re going through centuries, even millennia! We’re not used to it at all anymore, so this kind of beauty making its way through centuries, it’s quite extraordinary to see it brought back to life in this form, so I really enjoyed it!” said Laporte, who attended Shen Yun’s performance on Wednesday, March 11, 2020, at the Corum of Montpellier.

“The colors are sublime and the staging impeccable, of course, the artists are irreproachable, outstanding as they say in English, and I had a very, very good evening,” he added.

Based in New York, Shen Yun has won the hearts and admiration of audiences from all over the world. The show combines classical Chinese dance, interactive digital sets, and a full orchestra. Laporte is one of those who have been won over by the quality of the orchestra, which has been able to harmoniously combine oriental sounds with those of the West.

“The music is excellent, I was afraid that the music was going to be too string-based, [the typical sound] you can hear in [all] Asian music, but this is good, it is a very good combination,” Laporte said, adding he even spotted classical motifs reminiscent of Mozart.

The artists of Shen Yun have taken on the mission to revive traditional Chinese culture.

“The mission of the show, indeed, is to rediscover the roots of China and from this point of view, it’s stimulating. It allows us to keep a certain distance from the events that have taken place in China since 1945-49, of course,” said Laporte alluding to communism, which over the decades has wiped out this ancient Chinese culture.

“I’m going home feeling quite well … it is a good show and I recommend those who haven’t seen it to go and see it!” he concluded. “Without hesitation! Without any hesitation whatsoever!”