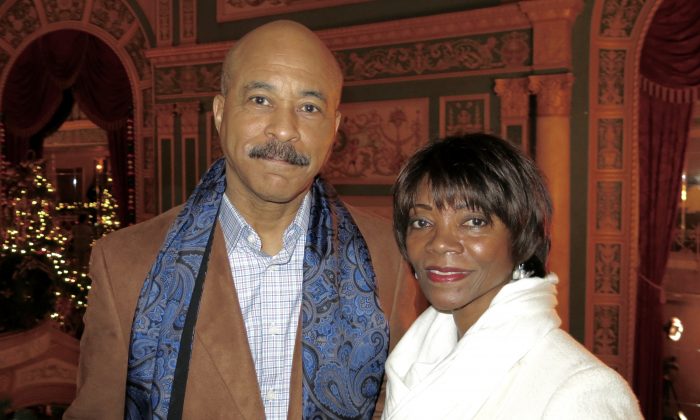 Clair Miller with her husband Melvin at the Detroit Opera House on Jan. 3, 2016. (Charlie Lu/Epoch Times)

DETROIT—Due to the busyness, many people wish to see Shen Yun Performing Arts but cannot. For Michigan couple Clair and Melvin Miller, the wait was well worth it.

Mrs. Miller, a bankruptcy attorney, wanted to see Shen Yun for many years. “Finally, I’ve got a chance to do it this year, and it was well worth the wait. I’m so pleased I had the opportunity.”

She described Shen Yun as an amazing event, adding that the performance was very colorful, with intricate choreography that touched on both historical and spiritual perspectives.

“It’s like a history lesson in a way,” she continued. “It’s culturally enlightening.”

Different parts of the New York-based company’s performance resonate with people in different ways. For the Millers, it was the vocalists who left a deep impression.

“I do like opera and I don’t get a chance to hear it that often,” said Mrs. Miller. “The opera singer was just stupendous! Her voice, the melody, the piano; it was just very touching.”

Some of the pieces feature bel canto vocalists, usually accompanied by a piano or another instrument, but with no dancers. These soloists are considered some of the best in the world and often move audience members with their powerful voices.

Shen Yun is unique in many ways. One way in particular is an overall message of returning to traditional values and the divine.

The Millers are in the day-to-day business of helping people. Mr. Miller connected with the first piece in the performance where the Creator descends to Earth.

“The divine spirit and his helpers descending from heaven to help those folks that are not having the best of time in their lives; that right there is social work. That right there is counseling,” said Mr. Miller.

Shen Yun uses a digital backdrop to create “vividly animated settings, extending the stage and transporting the audience to a world where heaven and earth are one,” according to its website.

“I was also fascinated by the animation,” said Mrs. Miller. “I was like: ‘Wow! How did they do that? How did they make the dancers appear as if they’re in the sky some place?’ I don’t know how. I just found that’s pretty amazing!”

The Shen Yun Orchestra consists of both Western and Eastern instruments, and the cultural meaning can transcend the worldly gap.

“It made you feel a part of what she was singing,” said Mrs. Miller, referring to the on-screen translation of the vocalist’s song. “A part of the cultural strife, the fight for independence and freedom.”

Both Western and Eastern civilization have their bright side and their darker sides. In communist China, the persecution of Falun Gong or Falun Dafa is considered by many to be a darker side of modern history. The meditation practice is based on the principles of truth, compassion, and tolerance, but is viewed by the Chinese Communist Party as a threat because it became so popular.

“The monks, when they were dancing and the fact that they couldn’t meditate,” added Mrs. Miller. “For Americans, it’s like a foreign concept, but we’ve had a very tortuous history too. But it makes you appreciate the freedoms that we enjoy here. … I think the commentator said that many of the prohibitions are still in place as we speak today.”