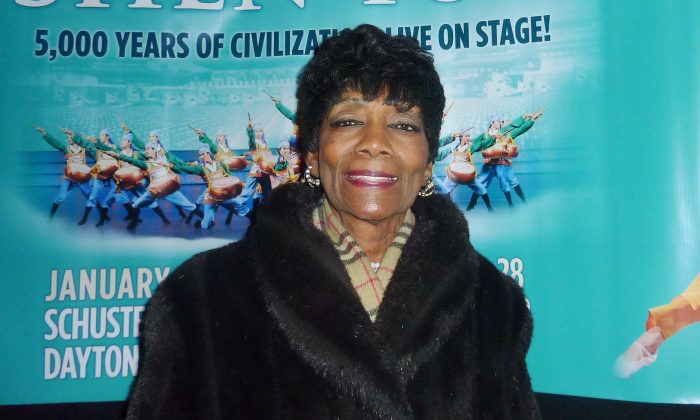 “I’ve never seen any show as beautiful as this show that I have seen tonight,” said the gospel singer, the only person ever to have received an honorary doctorate from Temple Bible College and Seminary.

Dr. Barksdale has seen New York-based Shen Yun every time the traditional Chinese music and dance company has come to Cincinnati. In fact, she so wanted to see the performance that she canceled her own show for the evening so that she could attend. “I was so excited; that’s why I came,” she said.

“Every year, I have seen this performance, it’s something more spectacular than before,” she said after the performance at the Aronoff Center for the Arts on Feb. 28.

“It’s like [something] we’ve never seen before,” she said, trying to think of how to describe it to people. “We would never see the dancing that [they] perform here, the colors are so colorful.” She asked how they could manage to get the blues, the reds, the golds, “all the beautiful colors together.”

A Shen Yun performance is made up of short dances which depict stories from China’s 5,000 years of civilization. In addition, award-winning vocalists and instrumentalists perform and help recapture the divinely-inspired essence of Chinese culture which has been all but lost to China today.

“China was once known as Shen Zhou—The Divine Land. This profound name describes a land where deities and mortals coexisted, and a belief that the divine transmitted a rich culture to the people of the earth,” states the company’s website.

Dr. Barksdale’s shouts of approval were for the spirit behind the excellence of the performances. She yelled once for the soprano who “held that note for a long time, and I felt [that] within me and I yelled out real loudly, okay: “Yes!”

She could tell that the soprano was going to hold the note. She said “she was feeling that within her, and I could relate to that because that’s the way music is portrayed, with the intimacy that it gives you. You can feel it within you.”

Singing since she was 5-years-old, Dr. Barksdale, early in her career, had pleaded with God to help her—she would never sing secular music again if only she would regain her voice. She had survived a devastating fire and smoke had damaged her throat. She’s kept that promise over her long career.

“I enjoyed it so very much,” she said. “Without my knowledge, [without] thinking that I was going to holler “yes!” and I did because she was so great.”

About the erhu, the two-stringed violin, while she heard it played, Dr. Barksdale said she was left feeling serene. “It was a quiet type of music, and you could just listen and feel the spirituality within yourself. It’s soulful, but it’s quiet, and that’s what I received from listening,” she said.

“I could listen to them play the instrument all night,” she said.

Her other involuntary cry came at the very end of the performance during the very last dance.

She was so grateful for the story in the last dance “which was spiritual, and it was so beautiful.” She felt that the performance made clear that we “worship Him by bowing down to Him, and that’s what they did in this performance tonight.”

After turmoil depicted onstage, she saw God “come, break into the clouds.” And when she saw that, she said, “I had a loud shout of ‘Yes!’ because I believe it with all my heart. “

She believes in God who “is the creator of everything. He has created you, me, and all people. It’s not about color or where you have come from or where you are, but where you are going. I thoroughly believe that there is a heaven, a better earth, and a new heaven … that we will see one day.”