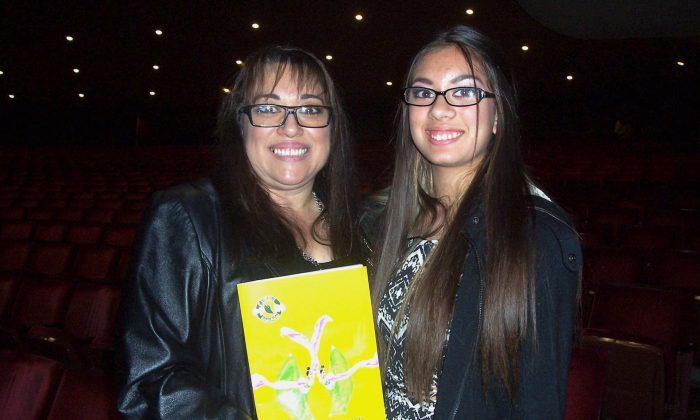 Mrs. Garcia is a paralegal who did a lot of jazz and ballet when she was younger. Her daughter plays the snare drum and loves percussion. Mother and daughter rarely go to the theater but after seeing the advertisement, Shen Yun was something they did not want to miss.

“We knew it was a great thing to watch,” Mrs. Garcia said. And Shen Yun did not disappoint.

“It was great, a lot of perfection … there were difficult routines … so I really enjoyed it,” she said.

“I noticed all their hands were in position, all the accents were made. I know they hit a lot of the accents with the music, and it was right on. Really nice.”

Classical Chinese dance is at the heart of Shen Yun, but the performance also incorporates some folk and ethnic dances from a possible 55 ethnic minorities.

Mrs. Garcia appreciated the different styles and how they incorporated the scarves and handkerchiefs into the dances, as well as the strength of the male dancers. “The handkerchief dance, and the sleeves, they were really very talented,” she said.

She and her daughter both thought the music, an orchestra which blends Western and Eastern sounds, was so perfect they found it hard to believe it could be live, and they were amazed with the synchronization of the music with the animated backdrops and the dancers.

“We noticed the different instruments that were used. It wasn’t just a basic orchestra. They had so many extras in there; we could hear all of that. The accents and the dance went directly with the music, so it was really good … It was such a good combination … the dance and the orchestra together.”

Miss Garcia said she had have always wanted to play percussion, and just hearing Shen Yun’s drums awakened that dream and made her long for it even more.

Shen Yun brings to the stage millennia of Chinese traditions and culture through music and dance. Although she is not Chinese, Mrs. Garcia felt she could relate to the mini-dramas presented. She felt they were universal.

“[Shen Yun] did a good job bringing the culture back. All the traditional culture. It was great,” she said.

She left feeling the performance had given them peace, letting them escape the world to peace for awhile and go to a place that was beautiful and spiritual.