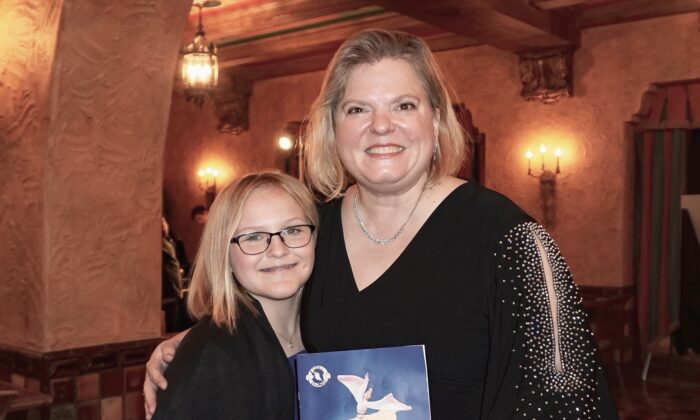 EL PASO, Texas—Michelle Smet said one clear message she received from watching Shen Yun Performing Arts at The Plaza Theatre was “the beauty of Chinese culture.”

Smet, a church worship leader, saw Shen Yun with her parents and her children who all really enjoyed the performance.

“I think it was a good blend of education, of the history of Chinese culture as well as even a look on modern-day [events that are] happening in China,” said Smet.

She also appreciated the humorous content of some of the stories portrayed.

Shen Yun’s mission is to revive traditional Chinese culture through the medium of classical Chinese dance, folk dance, and music.

The dances portray cherished legends and tales with moral foundations that are still relevant today.

“I did see a lot of connection in the [performance] to the faith part of life,” she said. “Especially when they showed the persecution. I think about the Christians in China—and how much persecution they face if caught … There are people putting their lives on the line to share truth and freedom,” she said.

“The Water Sleeves”, a dance depicting the imperial court ladies, and the “Plum Blossom in Spring” dance, were particularly enjoyable, said Smet.

Her daughter Heather was excited by the dance, “Monkeying Around in Paradise,” a humorous piece from the classic Chinese novel “Journey to the West” about Monkey, Pigsy, Sandy, and Tang Monk.

Smet considered Shen Yun very educational and said she had recently read a book on the history of China before communism and was thrilled to find she could correlate many of the story dances with what she had read.

Shen Yun was very entertaining and colorful, said Billy Fondren who was also in the audience. A retiree who had owned several companies, it was Fondren’s first opportunity to enjoy Chinese classical and folk dancing.

The pandemic had not kept him away.

“The pandemic is one thing but …  we have to move on with our lives. And freedom in this country is what we respect the most,” he said.

Fondren believed that the American people understood the suffering of the Chinese people and that Shen Yun brought hope.

Commenting on the Chinese communist regime’s destruction of traditional Chinese culture, he noted that human rights were important.

“We should all have the right to live free and do the things that we need to do within the limits of the law,” he said.

Joe Ontiveros and his wife, Deborah, also enjoyed the performance.

“It’s very vibrant. And the costumes are beautiful,” Deborah said.

Deborah, a psychologist, and Joe, a retired federal agent, own a psychology service for police officers.

”The dancing is outstanding,” said Joe. “And I think the message is on cue because communism is not good. And we need freedom throughout the world and Marxist communism doesn’t work. And there’s no freedom to practice your religion of any kind. So, they hurt them—and this message needs to go out to as many people as it can,” he said.

Joe practices martial arts and said he was able to relate to the spiritual aspect of Shen Yun.