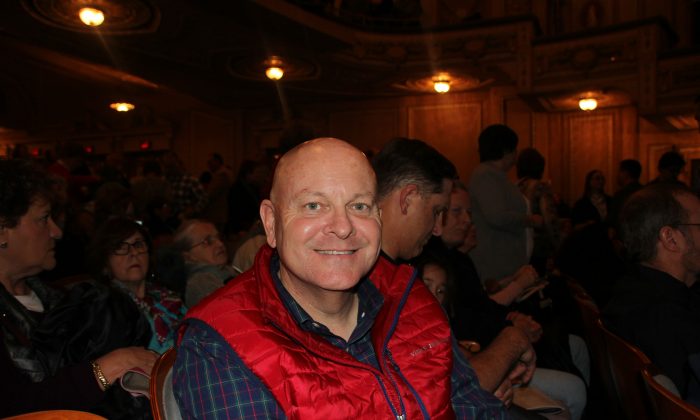 The stories, however, do not merely entertain. They seem to also provoke the audience to think about deeper issues that they may not usually ponder after watching a typical stage performance.

Dean McAlister, SVP at a healthcare consultancy, was one of those people. He was stirred to self-reflection after viewing Shen Yun.

The New York-based company, whose mission is to revive 5,000 years of traditional Chinese culture, is in the midst of its 2019 world tour, in which six equally-large contingents are traveling to over 130 cities across four continents.

For McAlister, who works at STEM Healthcare, it was the stories portraying suppression of faith that prompted deep reflection.

Shen Yun depicts the persecution of practitioners of Falun Dafa, in modern-day China. Falun Dafa, also known as Falun Gong, is a spiritual discipline that incorporates a set of meditation exercises and a set of teachings centered upon the principles of Truthfulness, Compassion, and Forbearance.

The practice grew in popularity in China in the 1990s, leading to around 70 million practicing by the end of the decade. This was unacceptable to the Chinese Communist Party, which banned the practice in 1999, launching a sweeping crackdown on adherents of the faith. People who are found to practice Falun Gong are arrested, detained, imprisoned, and subject to torture and even death.

The SVP said the message he received from the performance was that “[religious] tolerance always wins over persecution.”

McAlister also appreciated the role of dance in telling the history and the stories of the Chinese people.

In particular, he saw how the dances were also an expression of belief in the Creator. For millennia, stories of the Creator has passed down among Chinese people, a divine figure who would come down to Earth and offer salvation to humankind.

“I think it is important for people to realize that religious faith can’t just be practiced in a vacuum,” he said.

“It has to be expressed publicly, and it has to go beyond just religion to relationship, and ‘what is your relationship with that Creator?’ … ‘What do you choose to do?’”

Another theme that inspired McAlister was perseverance amidst hardship.

“I think it is very evident that the Chinese people in their long history are very patient. And they have outlasted a number of things that weren’t done right,” he said.

“Eventually the power of the people wins, and the power in a Creator wins.”

With reporting by Janita Kan and Cathy He.