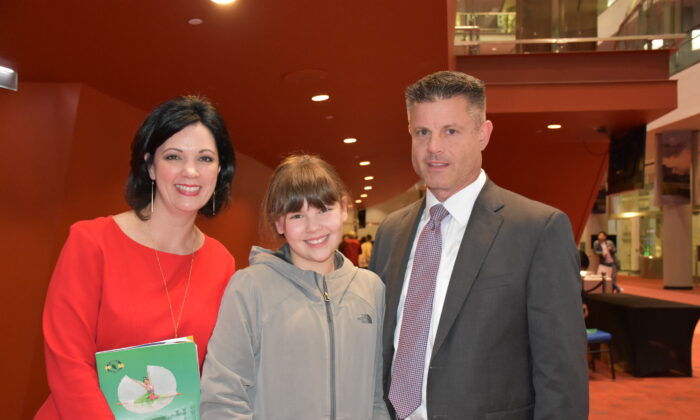 James Groesbeck, the director of a local company, brought his wife and daughter to see Shen Yun on Feb. 17, 2020.

Out of the many aspects that come together to make a Shen Yun performance what it is—dance, stories, live music,  the colorful, flowing costumes, animated backdrops, and more—James said he most enjoyed seeing the challenging tumbling techniques that are part of classical Chinese dance.

“I’d say the acrobatics and just the ability of the dancers … The older I get, the more amazed I am at it. The further away I get from being able to do stuff like that, the more impressive it is,” he said.

Hi wife, Monica, is a registered nurse, and his daughter, Abigail, is in fifth grade and has taken dance lessons for seven years already.

“[Shen Yun] was just overall very fantastic,” Monica said, adding a note of gratitude for the artists themselves. “Thank you for coming, and you know, we hope that you continue to come. And it’s just visually stunning, I mean really. And everybody’s in unison. I’m sure they practice long hours, but everything is just, you know, spot on. And everybody, I mean, I didn’t notice any mistakes. … I know they practice really long and very hard to get all of that down.”

Young Abigail added her thoughts on the performance. “I just really enjoyed it, and it was really pretty,” she said.

“But one of my favorite things is they walked heel first. I really liked that. I thought that was different and I liked it,” the fifth-grader added.

Shen Yun’s mission is to revive traditional Chinese culture, once almost lost, and share it with the world. Classical Chinese dance forms the foundation of their renowned artistry. With this ancient and highly-expressive art form, Shen Yun’s artists pass on stories, divine legends, and depict modern scenes of persecution, compassion, and hope set in present-day China.

Abigail’s mother elaborated on the girl’s comment and drew a connection between her own family background and Shen Yun’s cultural heritage.

“Watching these performers go from heel-to-toe was neat, and it was just fantastic to see a different style of dance. Actually, our family is from Japan. My mother’s maiden name is Nishimura,” Monica said.

“So, yeah, it was very heartwarming for me, you know, albeit, you know, [Shen Yun] is from China, but it’s still kind of the same background. And so it was really nice, and it was just visually, very beautiful. So we really really enjoyed it,” Monica added.

A dance that the couple’s daughter particularly enjoyed was “Water Sleeves.”

“It was so, like, flowing and graceful,” Abigail said. “And then I really liked the background. It was really pretty.”

Shen Yun’s background uses patented technology to give the audience the impression that the dancers on stage can fly through the sky and into other dimensions. The amazing theatrical effect regularly elicits gasps from audiences around the world.

Traditional Chinese culture is a divinely-inspired culture, according to legend. Shen Yun passes on this age-old belief in the divine by portraying the legend of the Creator who will one day return to earth, as well as spiritual practices and beliefs like Buddhism, Daoism, and Falun Dafa.

James said he was unfamiliar with these traditions, but he enjoyed seeing them in the performance and hoped more people would be inspired by them.

“Well, I enjoyed that part of it,” he said, referring to the spirituality in Shen Yun. “I’m not necessarily, I don’t know that much about it, but I picked up on a little bit of it, and I think that’s good. Yes, we need more of that in the world.”

He added that although so many faiths exist in the world, he found values in Shen Yun that everyone can agree on.

Monica agreed and felt that a certain principle, in particular, formed a cornerstone of meaning in Shen Yun.

“Well, it was, integrity. And like my husband said, there is something more than just this earth that we live on, you know, the divinity. And being devoted, you know, to something of good value,” she said. “Peace and love and you know, ‘Hey, let me show you a better way’, there’s a better way to do some things.”

The family agreed that they would definitely like to come back next year to see Shen Yun again.

It’s almost time! After months of rehearsals perfecting new choreography and music, creating hundreds of unique costumes, and designing theater-expanding animated backdrops, the time to share all this with you is almost here. There less than a month to go before we kick off the 2020 world tour with a completely all-new production! Are you ready for it? Find a performance near you: https://sypa.us/2FbwR2U