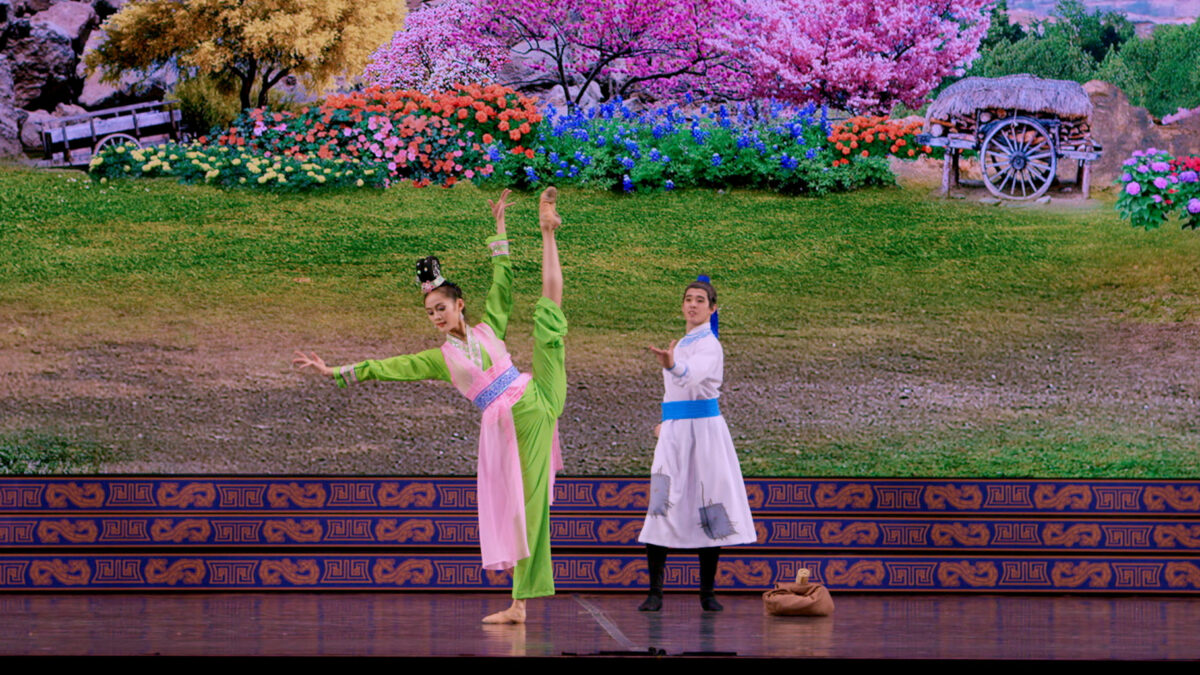 Angelia Wang is iconic. Despite the fact that society at large has long had little working knowledge of the intricacies of classical Chinese dance, within the first decade of New York-based Shen Yun Performing Arts’s creation, Shen Yun became a household name. And Wang, having been with the classical Chinese dance company since 2008, was one of its first recognizable faces.

But she doesn’t associate her career with stardom. Instead, when speaking about Shen Yun, Wang always expresses sincere, heartfelt gratitude. She’s grateful that this American company has given her the opportunity to use her art and talent to express her faith and share a positive message with the world, something she would never have been able to do in communist China.

“I was born in Xi’an, the historic capital of six dynasties,” Wang said in a Shen Yun Creations video. It’s the city of the Terracotta Warriors, and the start of the Silk Road. It’s a city that houses some of China’s remaining iconic pagodas, a place where even every bus stop carries a name with history.

“The ancient Greek philosopher Plato taught that human art is an imitation of divine forms. If you look at the ancient aesthetics [and architecture] of the East and West, they’re about symmetry; they’re bright, grand, and clean,” she said. “As Shen Yun performers, we have a universal understanding of beauty, movements that are grand and long.”

After some 1,400 performances with Shen Yun, Wang knows exactly what it takes to be a Shen Yun dancer.

Each Shen Yun performance includes over a dozen dances, a number of which prominently feature props. One year, there was a dance where the female dancers used octagonal handkerchiefs throughout, spinning and tossing them into the air. As a principal dancer, Wang had to perform a feat that included throwing a spinning handkerchief forward and up, performing a front walkover, and catching the quickly returning handkerchief as it fell. It was a difficult technique, and sapped her confidence.

“Every time, while waiting in the wings to go on stage, I would tell myself, don’t be nervous, OK?” She would psych herself up in the wings, tuning out everything around her.

“I remember when I first started to dance, I only thought about myself.”

Then, one night, she set down the handkerchief as she waited in the wings, and only then did she notice that she was surrounded by people who were cheering her on.

The realization washed her nerves away, and that performance was unlike all the previous ones.

“I remember that day; when I threw my handkerchief, it felt like it wasn’t me who threw it,” she said. Usually, after finishing the walkover, Wang would frantically be searching for the returning handkerchief, in a rush to catch it in time. This time, as she finished the move, the handkerchief drifted over to land right in her open, waiting hand. Wang wondered, was it the energy of everyone coming together that was supporting it?

“At that moment, I suddenly felt [that] when I let my ego go, I gained something greater.

“When we dance, we talk about the ‘breath,’ and see if we’re breathing together, whether the flow is together. And when everyone gets to their pose at the same time, it feels like time stands still. Then you start to feel each dancer breathing with the music. It’s a subtle feeling, one that feels like something slowly flowing out from a crevice.

“No matter how many people are on stage, whether it be a dozen or 20, when everyone is mindful of each other, you can feel it. It feels like everyone is together. I feel like this is the special teamwork of a group that has been together for a long time.”

“A woman’s beauty has a gentle, reserved side as well as a majestic side, bright and charming,” she said.

As a longstanding principal dancer of Shen Yun, Wang has had the opportunity to play many of the major female historical figures of ancient China.

A recent and memorable role was that of Wang Baochuan, a Penelope-like figure from the story of “Han Yao,” incidentally set in the dancer’s hometown of Xi’an.

“‘Han Yao’ is a love story from the Tang Dynasty. It’s about a lady who stood by her promise for 18 years, while she waited for her husband to come home from war,” she said. The story-based dance that Wang was performing included the character meeting her betrothed for the first time, the happy marriage, the tragic moment of parting, the 18 years of anguish, and the long-awaited reunion.

It was a role that put her acting skills through the paces.

“The choreographer said, ‘When you hear the music at these points, I want you to be moved to tears. Put in more effort in this regard,'” Wang said. She used regular dance classes as an opportunity to work out her character’s emotions, imagining scenes from her story when she heard different music during class.

“Should I portray her timidity when she first meets her husband Xue Rengui? Or when her eyes would light up when he’s around? Her anguish, waiting for 18 years? Or when she gave in to despair when her parents arrived?” she said. “Once I have worked with the idea inside myself, I can bring it out through movement and expression.”

What Wang wanted to convey to the audience was the traditional virtue that Wang Baochuan possessed.

“When her husband decides to fight in the war, she is really reluctant to let him go,” Wang said. Despite her reluctance, she packs his things to hand to him as she sees him off and bids him farewell.

“She wants to look back, to reach out, to call out his name, but she tells herself ‘I can’t,’ because she knows that her husband, too, is reluctant to leave.

“Only when he is a good distance away does she turn to look at him,” she said. This is a particularly traditional trait, she added, “enduring without complaint.”

Wang explained the character’s motivations, something she wouldn’t have picked up on if not for her realization of her ego early in her career.

“Her decision was also based on a sense of obligation to her country. For the sake of a more important cause, she was able to think less about herself,” she said.

“If she hadn’t been mature and resolute in her decision, the Tang Dynasty might’ve lost a famous general and the country would have lost a pillar of state.” Her story is one that those of us living in modern times can still learn from, Wang noted.

“When you overemphasize your own importance, and you want more from the people around you, yet you don’t get what you want, then you feel resentful, you feel society is unjust, life is unsatisfying, and so on.

“But when you don’t put yourself first, and don’t emphasize your own importance, you even consider a smile you receive from others to be a huge blessing, you feel gratified. That’s why the ancient Chinese said, ‘To know contentment is to be happy.’

One of Wang’s teachers and mentors hopes that when people in the future remember Angelia as a dancer, they will remember her not just as someone who dances well, but also as a person with good character.

“To learn art, you must first learn to become a good person,” Wang said. “How your moral character really is will show itself on stage.”