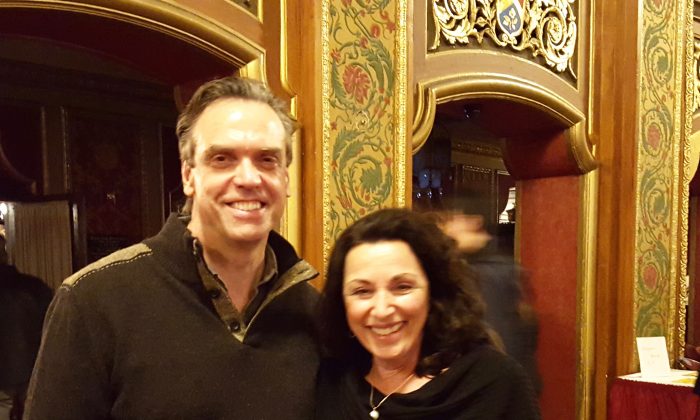 PROVIDENCE, R.I.—In the last 60 years or so, China has deliberately tried to dismantle traditional culture in China which had lasted for millennia. Shen Yun aims to restore this culture through the performing arts.

“If they don’t do it who’s going to preserve the culture?” said Mary Ellen Cherney, referring to Shen Yun Performing Arts. Mrs. Cherney attended the performance at the Providence Performing Arts Center on Feb. 6, 2016, with her husband Robert, a psychologist.

Shen Yun takes audience members on a journey from ancient China to modern times. The culture of ancient China was very different from that of modern China “where traditional culture has nearly been lost,” according to the Shen Yun website.

“I think it’s important to know where you come from to have rituals rooted in your family, because you sort of feel it,” added Mrs. Cherney.

Mr. and Ms. Cherney are no strangers to culture, values, and tradition. Mrs. Cherney, a nurse by trade, reflected briefly on her Arabic heritage at the Providence Shen Yun performance and noted differences between the traditional Arabic dance and the Chinese dance seen in Shen Yun, but celebrated those cultural differences: “It’s a wonderful thing! So it’s important to preserve that, because they are different.”

“I think this is the way that the next generation is going to learn the culture because I think a lot of it is being lost,” added Mr. Cherney.

But, if cultures are not passed down to each successive generation, or if they are forcibly repressed, then they might be lost to history, he said.

“Those are your traditional roots, and I think people need to know that, generation to generation, otherwise, I think you lose the connection not only between families but between communities,” he said.

“I mean, I’m not surprised that they can’t perform this in their own country because I guess there’s a lot of persecution there,” continued Mr. Cherney.

Mr. Cherney was referring to the persecution of Falun Dafa, a peaceful meditation practice that is currently repressed in China and which is depicted in some of the dances.

Despite the sometimes serious themes, Mr. and Mrs. Cherney truly enjoyed it. “Even though there’s some difficult subject matter in some of the dances, the overriding feeling I had was beauty and grace,” said Ms. Cherney. “There’s a gentleness that I really like,” added Mr. Cherney.

“It was transcendent!” said Mr. Cherney. “It takes you to a different place. It takes you out of the ordinary every day, and I think it brings us to a place that is wonderful!”