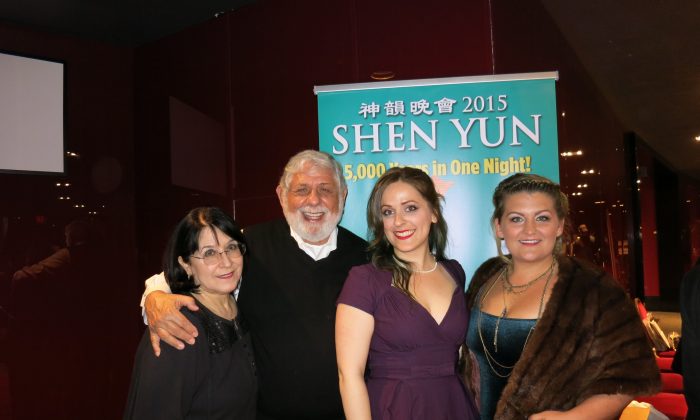 SAN DIEGO—The world-renowned Shen Yun Performing Arts graced the stage of the San Diego Civic Theater on March 26, and again enchanted audience members with its performance of music and classical Chinese dance, which is one of the most comprehensive dance systems in the world.

In attendance was Sam Sims, a senior vice president of engineering, and his family.

Mr. Sims was not only impressed by the perfection of Shen Yun’s dancers, but also by the richly entertaining, educational, and spiritual aspects of Shen Yun. “And not only that, but we learned something. We learned about history. We learned that in those days, they felt reincarnation started in heaven, come to earth, you live your life, and then you back to heaven,” he said.

China was once known as the “Divine Land,” with the belief that its rich culture was a gift from the heavens. Shen Yun seeks to revive this tradition that has nearly been destroyed under the Chinese communist regime, through demonstrating “principles such as benevolence and justice, propriety and wisdom, respect for the heavens, and divine retribution,” says the website.

In 2006, a group of distinguished classical Chinese artists from around the world founded the independent, non-profit Shen Yun Performing Arts in New York with a mission to revive traditional Chinese culture through music and storytelling dance.

“Whether set in the past or in contemporary China, every dance embodies traditional Chinese values. Ideals of loyalty, filial piety, and veneration for the divine are cherished and celebrated. Heroes are extolled for their compassion and tolerance as much as their courage or determination when facing adversity,” according to the Shen Yun website.

Mr. Sims appreciated the portrayal of good against evil in the dance pieces “Monks and the Red Guards,” “Path of Hope,” and “Hope for Future,” depicting the Chinese communist regime’s oppression of Chinese beliefs. He noted, “It was more salvation in heaven and goodness. It was excellent.”

Chinese spiritual beliefs, which he believed were universal beliefs, deeply touched him.