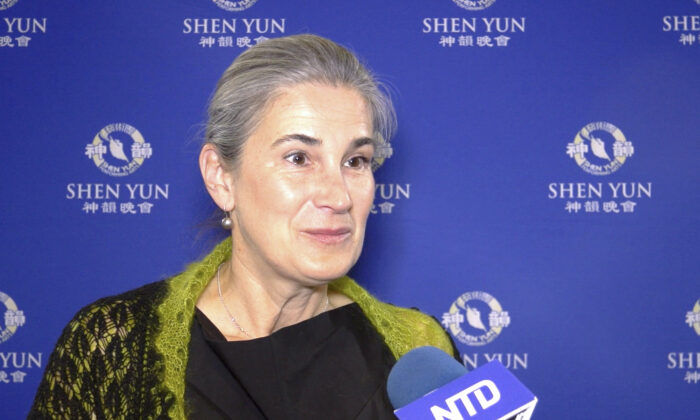 SAN LUIS OBISPO, Calif.—Although everyone knows that China is a big nation under the rule of communism, not everyone knows exactly what that means or what it looks like. Shen Yun Performing Arts are using dance and music to express different sides of China as it was in its glory days as well as during the present.

“I do appreciate the fact that this show does try to revive traditional Chinese culture because I think that has been twisted lately. [They’re] showing the truth of what the communist regime in China does,” said Dora Cary, a business owner.

Ms. Cary refers to one of the dances that depicted the persecution of Falun Gong practitioners in China. Although the tone of the dance is serious, it ends in happiness and hope.

“One of the numbers was really eye-opening and shattering really. I was shocked and it’s based on true events. So I think maybe many people do not know about this. It is good to show this,” she said.

Shen Yun is based in New York, and every year, it puts on an all-new production with new choreography, music, and costumes.

“Incredible! There’s a symphony of colors. I loved all the numbers, just the burst of color and the movement and everything. How [they] mastered [the] movements and fabric and color. This ensemble is incredible. And also the fact that everybody is in synchrony, for such a big ensemble it’s really great. I enjoyed it very much,” she said.

Ms. Cary attended the performance with her daughter and she shared some of their mutual reactions.

“It’s a wow moment—when my daughter and I are watching and we turn to [each other.] This is incredible. I think there’s so much work and control. The way they move the body so smoothly, those acrobatic elements but finished so smoothly. It’s absolutely breathtaking. I’m so glad we came,” Ms. Cary said.

“This was on my bucket list. I wanted to come to Shen Yun for such a long time.”

Shen Yun uses a patented digital backdrop to depict scenes of the heavens. The storytelling is filled with messages of hope and salvation.

“I was thinking that that’s a really good message. The Creator coming to save the world. That’s something that gives us hope. The world is in such turmoil. So it’s not a bad message to send,” she said.

Ms. Cary added that she would recommend Shen Yun.

“Amazing, fabulous, incredible. I would say it’s a must-see. It’s really not only the mastery of movement, the colors, the costumes, but also the deeper meaning behind all the numbers. I think it’s a must-see, especially if we want to understand the Chinese culture a little bit better. I love it and I will highly recommend it.”