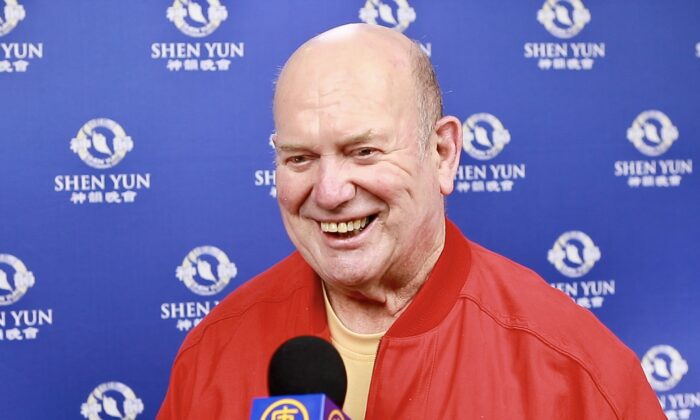 Mr. Rowe, who is also a recipient of an Order of Australia (AO), one of the country’s highest honours, said attending Shen Yun is an opportunity to understand “the true side of Chinese historical culture—5,000 years of it.”

I think it has a positive impact, because [it] brings a different dimension of what China and Chinese culture is all about. I think it’s very important.
— Trevor Rowe

“I think it has a positive impact, because [it] brings a different dimension of what China and Chinese culture is all about. I think it’s very important,” he said.

Shen Yun’s mission is to revive traditional Chinese culture, said by ancient Chinese people to be “divinely inspired,” which was almost lost after 70 years under communism.

This is an aspect of the performance that Mr. Rowe found to be important, saying Shen Yun brings to the fore, through dance, what he said was “not commonly known” in modern times about China’s ancient culture, including the “diversity of that culture.”

Shen Yun is said to be the world’s premier classical Chinese dance company, which also performs ethnic dances from across China.

Having lived in Hong Kong and China for 15 years, watching the New York-based Shen Yun present authentic Chinese culture on stage Down Under was refreshing for Mr. Rowe.

“As someone who’s lived … in that part of the world, I understand the cultural significance and the loss of the subtleties of the Chinese culture in today’s modern-day and age,” he said.

For 5,000 years, China was a place where harmony between heaven, earth, and humankind was the central belief of society. China was known as the “The Land of the Divine,” according to Shen Yun’s website.

But Shen Yun cannot be seen in China where the country’s ancient spiritual heritage has been replaced by the atheistic culture of the Communist Party, and young people are not taught their history accurately.

Mr. Rowe wanted his Chinese friends to also experience Shen Yun, so he convinced them to come along, promising they would see the “true side” of China’s culture.

“You’ll find this amazing,” Mr. Rowe said, recounting what he told his Chinese friends. “You’ll see a whole different aspect of the authenticity and the ambiance of Chinese culture, and its impact, and its passion, and its kindness, and gentleness that you don’t appreciate today.”

‘Perspective’ on Arts and Culture

Shen Yun will visit Sydney, Melbourne, Bendigo, Adelaide, the Gold Coast, and Toowoomba throughout April and May amid its world tour.

Sameer Pandey, the deputy mayor for the City of Parramatta, said that Shen Yun should be promoted far and wide.

“I think it’s really important that we promote shows like this one. It gives people a perspective of arts and culture,” Mr. Pandey said, adding that arts and culture were the “soul of any city.”

“I think it’s important that we display that soul everywhere we can, so I would definitely encourage for this to be displayed in as many cities as we can,” he added.

Alongside classical Chinese dance, Shen Yun presents ethnic dances, solo performances, and tales of myths and legends, as well as vignettes from modern-day China under the tyranny of communism.

It’s a journey that we see on the stage from ancient Chinese culture to modern-day China.
— Sameer Pandey

“It’s a journey that we see on the stage from ancient Chinese culture to modern-day China,” Mr. Pandey said.

“I would say this is an exceptional display of elegance, ease, emotion, enthusiasm and energy. I love it,” he said.

The art form at the heart of Shen Yun is classical Chinese dance which has been refined over thousands of years to become one of the most comprehensive dance systems in the world.

Lyn Ward, who was twice awarded “National Coach of the Year” by Gymnastics Australia in 2007 and 2008, and has seen elite gymnasts compete at world championships, was left in awe of the Shen Yun dancers’ skills.

Ms. Ward said the traditional Chinese culture displayed in Shen Yun’s vignettes was “more beautiful” than she imagined. She said that both she and her husband Peter, a retired pilot, had enjoyed every minute of the performance.

Classical Chinese dance incorporates advanced tumbling techniques and movements to enrich its dance vocabulary and expressivity. Additionally, an emotional expression, or bearing, known as “yun” is permeated in every movement. The bearing of the dancers was not lost on Ms. Ward.

Garth Harris, a medical scientist and co-director of BioMedica, a nutraceuticals company, said he was inspired by Shen Yun and expressed his desire to see a return to traditional culture—especially in China.

“I think we’ve all got a duty to try and bring that culture back to the betterment of humanity,” he said.

Shen Yun was “absolutely brilliant” in terms of the dancing, costuming, and music, he said, adding that the performance had an “inspiring ring” to it, which allowed him to see how the Chinese Communist Party (CCP) lacked any semblance of authentic Chinese culture.

“I think it’s very difficult, I’d imagine for Chinese people living in mainland China and I can see why they all want to get out and have the freedom of the West,” he said.

Mr. Harris was struck by a scene depicting a Falun Dafa practitioner being killed by a doctor for their organs in modern-day China.

He said using dance was a non-confronting way to tell the story of the persecution of Falun Dafa. “It just opens people’s hearts and minds,” he said.

Mr. Harris drew comparisons between what is valued in his own Christian faith and that of Falun Dafa, an ancient spiritual practice based on the principles of truthfulness, compassion, and forbearance; noting the positive values and “heavenly aspirations” of both.

“Western tradition came from the spirituality of Christianity and I can see the Falun Dafa going back to tradition,” he said, adding: “I feel that we’re all really aspiring to God.”