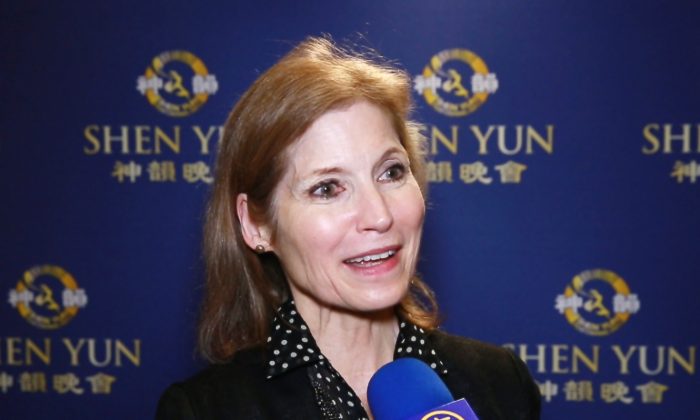 THOUSAND OAKS, Calif.—”It was really a marvelous experience. I truly loved it,” said Clare Highley, a landscape designer and artist, after attending Shen Yun Performing Arts with her family at The Fred Kavli Theatre on Thursday evening, Feb. 5.

New York-based Shen Yun was founded in 2006 with a mission to revive the true, divinely inspired culture of China through music and dance and share it with the world, according to the official website.

A Shen Yun performance focuses on classical Chinese dance, with live orchestral accompaniment featuring instruments from both the East and the West, musical soloists, colorful and elegant handmade costumes, and a dazzling interactive projected backdrop to round out the experience.

Ms. Highley said she and her family surprised her mother with up-close tickets to Shen Yun for her birthday, since she kept commenting on wanting to go every time she saw an advertisement.

As an artist, Ms. Highley took the time to enjoy the background scenery and animation, which she said was fascinating.

“The backdrops are magical windows to completely different realms,” says the Shen Yun website. “From vast open grasslands in one dance to the stately elegance of Tang Dynasty pavilions in another; from dusty yellow battlegrounds to tropical beaches to Himalayan peaks to picturesque scenery of the Yellow River Delta—the digital projection infinitely expands and transforms the stage.”

“They were very complex,” she said. “I loved the effects of the clouds. I thought they were quite unique.”

“I could recognize some of the plants specifically, which was fun for me,” she said, being a landscape designer. She enjoyed that certain flowers were also included in the stories and symbolism, such as plum blossoms.

The vibrant colors also spoke to her, especially the rich shades of green, which she said was her favorite color. She noticed that pink was often paired with the green in the backdrops and the costumes, which she said was beautiful and very striking.

“[Pink] makes you feel happy—spring, blossoms and rebirth. It’s uplifting, and the green with it is a nice complement,” she said. “Maybe because I like plants, green I really respond to.”

The deep sapphire blue of another dance also struck her, and she said she would like to learn more about the symbolism of the colors.

“But you obviously have to watch the dancers as well,” she said. “There’s a lot going on and a lot to keep you busy. They complement one another really nicely.”

Another part of the performance that touched her were the long, flowing sleeves of the female dancers, which were thrown out into the air in arcs and circles and then brought back in again.

“It appeared to me almost like a give and take, or a rebirth I would say, because the sleeves went up and then sort of folded back. I thought that was very beautiful,” said Ms. Highley.

Since she was so close to the stage, Ms. Highley noticed the intricate hand movements of the dancers. She said both the men and women dancers were very powerful and graceful in different ways.

One of Shen Yun’s musical soloists played the two-stringed Chinese violin called the erhu, which Ms. Highley thought was very moving, giving her a tranquil and peaceful feeling.

According to Shen Yun’s website, the erhu is richly expressive, and one of the most important Chinese instruments, with a history of over 4,000 years. Though it has only two strings, it can convey a wide range of emotions.

Ms. Highley thought the Chinese instrument called the pipa was also beautiful, and planned to read up on the instruments at home.

“It was good music to daydream to,” she said. “Very gentle and inspiring. I loved the sound of both of those.”

Overall, Ms. Highley said the performance gave her a feeling of unity and peace, yet exhilaration.

“Spirituality [was] demonstrated through their movement,” she said. “It’s powerful and beautiful and universal.”

“We all have similar beliefs that there is a greater being perhaps, and we will go to a better place, and that goodness is a virtue worth protecting. Compassion and truth,” she said. “It’s well worth seeing.”