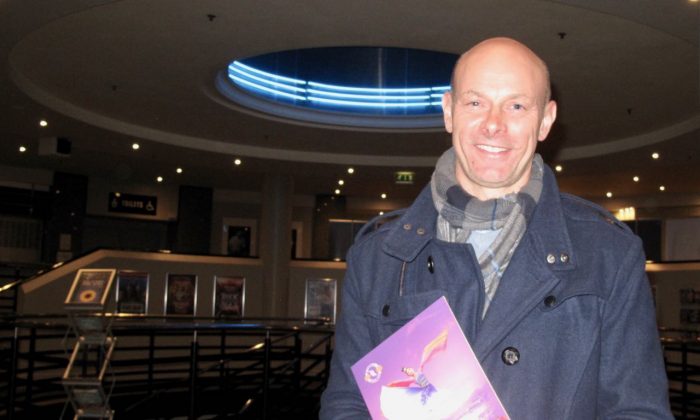 WOKING, United Kingdom—Chinese classical dance has been enriched from dynasty to dynasty, over thousands of years. Shen Yun dancers are bringing this rich art form to life on stage.

The artists’ movements are like a “bright thread running through embroidery,” said writer Gary Wright, who watched Shen Yun Performing Arts at the New Victoria Theatre in Woking on Jan. 10.

He was touched by the inner beauty of the performers.

“It was danced and performed with beauty and with spirit, and with heart, allied to all of the wonderfully colorful costumes,” he said. “It just made it a very different performance, and well worth going to see.”

Classical Chinese dance contains China’s deep cultural traditions. Shen Yun, a company based in New York, has the mission of reviving this authentic Chinese culture through dance and music.

The dancers of Shen Yun tell stories from ancient history to the present day through Chinese classical dance. It’s one of the most expressive art forms in the world.

Wright was deeply moved by the traditional values that were expressed in the stories.

“If you keep an eye on tradition and you honor tradition and you follow it and you always keep it in mind—even when you’re walking down the street with a phone—and not turn your back on history then that way the moral compass will survive,” he said.

“That message was very clear in Shen Yun and it was a very colorful kaleidoscope of a story that was put together to keep pointing—point the way of moral compass in the modern age.”

He said the narrative arc of Shen Yun had “the opposite curve” to most Western stories.

While most Western stories ”chart a decline and fall and then a rise of the character at the end,” in Shen Yun, “the moralistic message was presented plainly at the beginning,” he said.

“It wasn’t concealed, it wasn’t subtle and it wasn’t revealed along the way, it was clear at the end of the performance that that arc was built upon all through the story,” he said.

“With Western stories, very often the story revolves around losing the moral compass, and then at the end of a good story finding it again.

“Whereas the message in Shen Yun is to be aware‚ to look down history and be aware that the moral compass points in one direction.”

Wright was struck by the contrast of the ancient tales of China with the final piece in the performance, which is set in the modern day. Dancers portray young people looking down at their cellphones.

“There was an immediate subtle distance between the audience and the people on stage,” he said.

“It wasn’t because the performance was bad, or there was a disconnect between the audience and the performers—it wasn’t that.

“That scene, for an audience member, it showed you a great contrast between a lot of the other tales [which] were rooted in ancient history.

“As an audience member, one felt closer to some of the performances in ancient history, than in the last section of Shen Yun which took place in modern day.

“And that’s simply because it shows such a great contrast between all of the previous performances and the last one.”

Watching the performers, he could see that each dancer had worked incredibly hard to reach the level of perfection they exuded on stage.

“[It’s] probably not just performance skills, I also suspect that it’s the important parts of their real life, by that I mean by being studious and still being mindful maybe of meditation and it comes through very clearly,” he said.

Ancient Chinese culture is said to be divinely inspired, with artists emphasizing self-discipline and virtue, aiming to create art that reflects their inner purity.

As written in the programme book, Shen Yun performers are reviving this tradition and draw inspiration from the spiritual practice of Falun Dafa. Through their shared spiritual journey “they meditate together, study teachings together and strive to live by truth, compassion, and tolerance,” it says.

Established in 2006, Shen Yun has the mission of reviving traditional Chinese culture. It’s a culture that has been almost lost under communist rule in China.

“It’s a very good thing that Shen Yun has been created outside of communist China and I think most of us can appreciate that it couldn’t survive within communist China,” said Wright. “As a writer, I’m always looking at how things are made and how and why we do things.”

He said that it’s a “very good and noble mission” to shine a light on the history and values before the “communist phase” of China.

“It was a very colorful, very acrobatic, very thoughtful and very uplifting performance,” he said.

With reporting by Xiaomin Pang and Jane Gray.