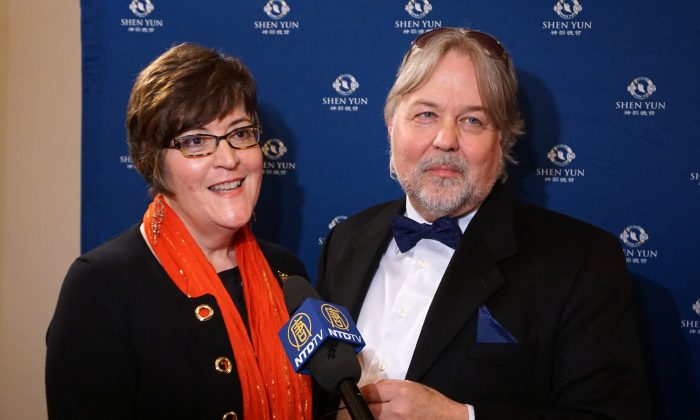 Twins Susan Sumner and Stephen Ross felt Shen Yun Performing Arts was powerful and poignant to them, after seeing a performance at the Kennedy Center Opera House on Feb. 18, 2016. (Courtesy of NTD Television)

WASHINGTON, D.C.—Susan Sumner has had her fair share of struggle. Watching Shen Yun Performing Arts at the Kennedy Center Opera House on Feb. 18 was a chance for her to take stock of life’s lessons and put things in perspective.

“When you live long enough, everyone knows that there is great trial and suffering that you will likely encounter, and how you respond is very important. So [Shen Yun] was inspiring from that standpoint,” said Ms. Sumner, adding, “and it’s wonderful to see important life lessons married to music and dance, and art.”


The way to overcome great tribulations is to “draw on something larger than yourself.”
— Susan Sumner

Ms. Sumner’s son has battled two bouts of life-threatening illness. Luckily, he is now well and will be starting college in the fall. Yet the experience changed Ms. Sumner’s perspective very greatly, she said. The way to overcome great tribulations is to “draw on something larger than yourself,” she explained.

The story takes place in a town in contemporary China, where people are practicing Falun Dafa. This is the spiritual meditation discipline, also known as Falun Gong, whose practitioners are persecuted in China today. A husband and wife as well as a group of young ladies start their morning meditation (one of the Falun Gong exercises) and as police pounce on the group they are arrested and beaten. Yet it is not a story of despair, as the theatergoers soon see.

She saw this through music and dance set against colorful backdrops that heighten the experience.

Ms. Sumner attended the performance with her non-identical twin brother, Stephen Ross, and their respective spouses.

“The pageantry, the color, the culture. The years and years of culture that are represented here, reflected in the performances. It’s just beautiful. The storytelling, you know, it’s gorgeous, beautiful,” said Mr. Ross.

He’d seen Shen Yun being advertised and was immediately “intrigued with the color of it” as well as, presumably, the movement, as he mentioned that he was a student of martial arts in his younger days. He wasn’t able to attend last year, “so I waited a whole year,” said Mr. Ross, recounting his anticipation. This year he knew he could come, so he made sure to attend with his family.

Above all, the stories were what resonated with Mr. Ross.

“There are stories that were reflecting love found and lost, then the battle between good and evil. The whole inspiration that comes from that. It moved us,” he said.

He exclaimed: “What an incredible undertaking!” in reference to the fact that Shen Yun is based in New York and was formed to revive China’s traditional civilization. “And to hear tonight, that these performances can’t even be seen or presented [in China], it’s sad to hear. … We’re thankful that we have the freedom here, in this nation, to see it,” he said.

For Ms. Sumner there was an added poignancy to the fact that Shen Yun was showing in the nation’s capital.

“To see the questions that it asks, I think is very meaningful. What are we pursuing, why are we doing it, what are we doing it for? Especially in a town like this, in Washington, D.C., which is a place of great power and influence, not just for one government but for many governments,” said Ms. Sumner.

Shen Yun’s stories, said Ms. Sumner, translate well, crossing any boundaries and allowing the audience to draw on all of their senses.

Mr. Ross added: “It was very powerful. It was very inspiring, besides [being] visually very beautiful.”