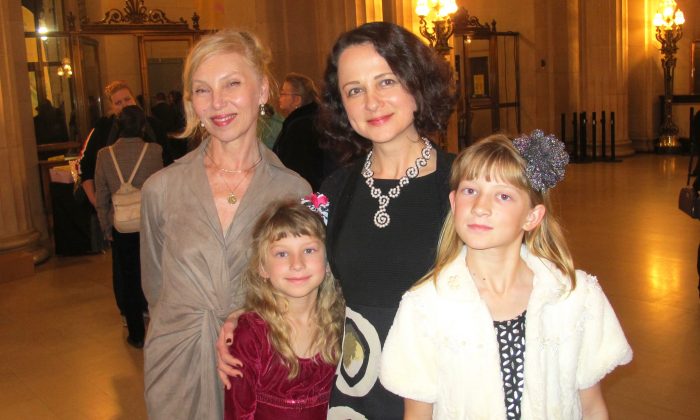 SAN FRANCISCO—Music plays a pivotal role in Shen Yun performances, setting the mood of each dance and bringing to life the legends and heroic tales.

For Natalia Petrova, a psychotherapist and opera lover, the power of soprano Min Jiang left the deepest impression.

“If you were listening to this performance, this soprano, she had a really powerful voice … this powerful vibrato … I was impressed. I’m an opera listener for many years, decades I would say, and I mean it’s a big voice—very specific, very national, but big voice.”

Min Jiang has had a flourishing career that began at age 17 when she was selected to perform professionally as a featured soloist with the Heilongjiang Province Arts Troupe. She has received coaching in both Chinese folk singing and Western vocal methods from many accomplished voice teachers, says the Shen Yun website.

According to the website, “The primary trait that distinguishes the singers of Shen Yun is their use of bel canto technique to sing Chinese text. This means that the singer must, while continuing to meet the challenges inherent in bel canto technique, retain proper Chinese pronunciation and diction. Today, these singers’ ability to do this is unparalleled.”

The soloists in Shen Yun sing songs written, composed, and arranged for each year’s new performance.

The website states, “Brimming with philosophical reflection about human life and containing deep layers of meaning, the texts go beyond the boundaries of nation, race, and culture, and have been fondly received and appreciated the world over.”

Ms. Petrova’s friend, Elena Sapozhnikova, said she found depth and meaning in Shen Yun, and that the experience of a Shen Yun performance is “more of a cultural immersion.”

The spiritual themes and stories are a “very important and nice addition to the show,” she said. “It gives it more meaning than just dance. It gives you more to think about, and maybe it represents the culture better than just giving it a dance.”

Ms. Sapozhnikova said the Shen Yun Orchestra was so perfect that it tricked her at first.

“In the beginning, I thought it was a recording, because it sounded so perfect, so well together. I had to look down to make sure they are actually playing.”

Ms. Petrova agreed with her friend that the orchestra was flawless. She said she appreciated the ability of the musicians to harmoniously combine Eastern and Western instrumentation.

“It’s difficult, because Asian music has this specific intonation which asks for some specific knowledge in music, so they have it. It was all impressive,” Ms. Petrova said.