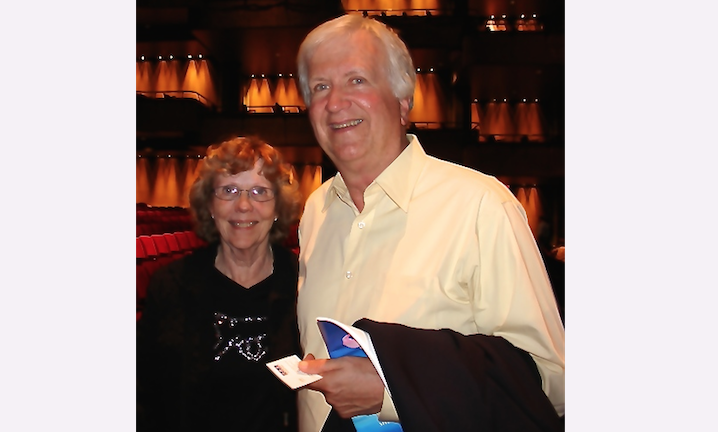 Bobbie and Jim Bradley share their enthusiasm for Shen Yun Performing Arts after seeing a performance by the company on April 19, 2014 at the Clowes Memorial Hall of Butler University, in Indianapolis. (Wan Ying/Epoch Times)
Shen Yun

INDIANAPOLIS, Ind.—Jim Bradley had a wonderful birthday, celebrating it with an evening watching Shen Yun Performing Arts, a classical Chinese dance and music company. “I learned so much about the Chinese history,” he said.

“I liked the way they told the story and provided the pictures to it,” he said.

“Oh, it was beautiful,” he said of the backdrops. “I enjoyed the way it helped tell the story,” he repeated. According to the company’s website, “with state-of-the-art graphics technology, Shen Yun’s digital-backdrop team creates vividly animated settings, extending the stage and transporting the audience to a world where heaven and earth are one.”

Thus, Shen Yun’s mission is to restore China’s semi-divine culture and present it through the arts.

Mrs. Bradley felt the performance was fabulous. She and her husband both commented on the intricacies achieved by the dancers with their handling of props.

“The ribbons—it’s very hard to do what they were doing with that. I appreciated the talents that they have and how unique it was—the intricacies of it,” Mr. Bradley said.

Of the tales that the dances told, Mrs. Bradley referred to a particular dance telling a story of modern times: the persecution of people of faith by the Chinese communist regime.

“It’s always tragic when a society has to change and come under communist rule, and that was very moving,” she said.

“And freedom is so important. We take it for granted in this country. They don’t. Those performers don’t,” Mr. Bradley said.