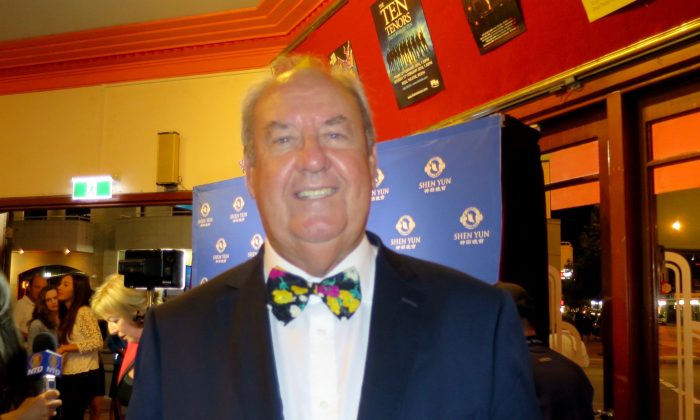 “I think the show’s fantastic, they are great artists—very talented people,” was the response of John McGrath after the full house evening performance on Jan. 30.

John McGrath, the Liberal Party Member for South Perth, was elected into the Western Australian Legislative Assembly in 2005 and re-elected in subsequent elections. Living in Como, he has sense of community and works hard to assist local people in maintaining a good lifestyle, he sees that protecting the environment as being key to peoples’ well-being.

Mr. McGrath spoke of the importance of Australians understanding the culture of China. “Culture wise we are still learning and we saw something here tonight from the Tang Dynasty,” he said.

“The Tang Dynasty (618–907 A.D.) is widely considered the zenith of Chinese civilization, its prosperity, peace, stability, and international influence during certain periods is unparalleled before or since,” according to Shen Yun’s website.

Through the universal language of music and dance, Shen Yun weaves a wondrous tapestry of heavenly realms, ancient legends, and modern heroic tales, taking you on a journey through 5,000 years of Chinese culture.

Mr. McGrath saw Shen Yun’s Australian tour as enriching and educational saying, “I think for Australians to see the culture and the history of a place like China is so different for us because we are such a young country—to see a culture that goes back thousands of years [and] to learn that Chinese dance was the origin for many forms of gymnastics.

“Now I realise, after watching tonight’s show, that the gymnastic form—dates back to the ancient Chinese dance.”

Each of the evening’s individual songs or dances highlights some cherished value of traditional Chinese culture—compassion, loyalty, kindness or bravery—often by telling a story. This together with an interactive backdrop, which synchronises all aspects of the performance, provides a unique experience for audiences.

I think the graphics are outstanding.
— John McGrath

“It’s something like I would never see anywhere else, I think the graphics are outstanding. So well-choreographed,” he said.

Mr. McGrath thought Australians should learn more about the fascinating Chinese history. It was clear to him after attending the performance, that Shen Yun is, “Brilliant, exciting, very energetic.”