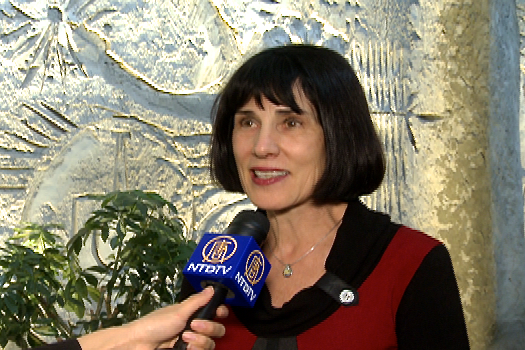 QUEBEC CITY, Canada—If she had to use just one word to describe Shen Yun Performing Arts, it would be “harmony,” said Geneviève Marquis, speaking in French, after seeing the renowned classical Chinese dance and music company’s Friday night performance at the Grand Théâtre de Québec.

“Harmony with the divine,” said Ms. Marquis, a judge with the province of Quebec.

Her observation speaks to the principle that motivates Shen Yun’s performers, who believe that art is intended to be uplifting, bringing joy to both the creator of the art and those who experience it, as noted on the Shen Yun website.

To achieve this, Shen Yun’s artists look to the divine for a pure and splendid source of inspiration, and it is this spiritual connection that is the heart behind each note and each dance movement.

Ms. Marquis gave recognition to this aspect of the performance, noting that she believes Shen Yun perfectly joins together humanity and the divine.

“It’s really the integration of divinity and humanity at its best,” she said, praising the dances. She also said she thought Shen Yun put human life in perspective, calling the show an “expression of the meaning of our time here on Earth.”

What’s more, the show presents the meaning of life “in a simple way that is accessible to people.”

“There is balance in everything. Every topic is interesting, every topic is covered in depth, with great finesse and an attention to perfection in detail. It’s extraordinary, it’s harmony,” Ms. Marquis said.

“The harmony of everything and the expression of depth, of human reality—impressive.”

What was most touching for Ms. Marquis was a dance piece that tells the story of a group of spiritual believers who are peacefully resisting brutal persecution by the communist regime in China today.

“The young girl, the persecuted people, the mother and daughter—I think that’s a culminating point in the show,” she said, referring to a story-based dance about the persecuted practitioners of the spiritual discipline of Falun Dafa, also known as Falun Gong.

“To understand that, yes, we can lose these fundamental rights—this is presented very well,” Ms. Marquis said.

While praising the outstanding performance, she also pointed to the themes of faith and hope that were presented.

“The performance of that child is extraordinary. It conveys human suffering, it conveys hope, it conveys the essential,” she said.